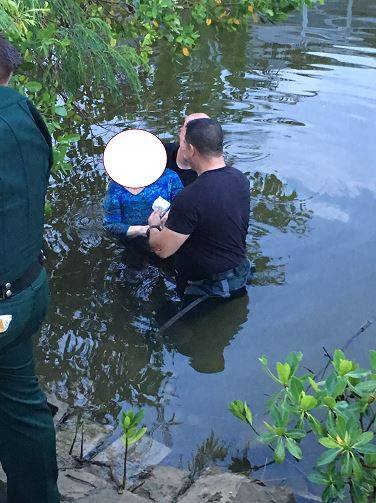 On 06-07-19 just before 6:30 p.m., Hernando County deputies were dispatched to the 3600 block of Flamingo Boulevard in Hernando Beach regarding a Missing Adult.

As deputies responded to the area, dispatchers extracted as much information as possible from the caller.

Upon arrival, deputies determined that the Missing Adult was an elderly female with dementia. Additional patrol deputies, K-9 teams, and the HCSO Aviation Unit were dispatched to Hernando Beach to assist with the search.

Deputies searched the area by ground and by air.

At approximately 8:15 p.m., Deputies William Harsayni and Dakota Hadsell spotted the female in a canal, a short distance away from her home.

Sergeant Christopher Calderon and Deputy Gregory Locke immediately shed parts of their uniforms and jumped into the canal to rescue the female.

The female slipped on some rocks, hit her head, and then fell into the canal. When deputies located her, she was clinging to a fallen tree branch. The female was bleeding from a head injury.

The deputies assisted Hernando County Fire Rescue personnel in removing the female from the canal. She was treated on scene then transported to a local hospital for additional care.

It is believed that if not for the alertness and diligence of these deputies, this situation may well have had a very tragic ending.