Prospects for a public gun range 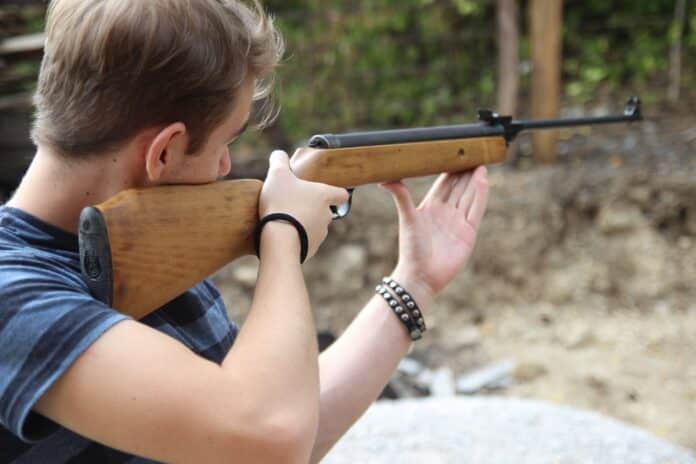 Commissioner Steve Champion asked the commission at the June 11, 2019 Board of County Commissioners regular meeting to consider seeking a federal grant to build a public shooting range in the county.

“Obviously, I’m involved in the shooting sports in the county … I’m very passionate about our second amendment and our Constitution …”

County Attorney Garth Coller interrupted Champion’s introduction to inform the board of an email he received.   The sender requested that Champion recuse himself from this item because of his involvement as an avid sportsman and gun shop owner.

“Obviously, that is not the law,” Coller said, explaining, “Even if we were voting today, (Champion) would be required to vote,”  because Champion or his immediate family does not stand to gain or lose anything as a result of the discussion or its outcome.

Champion continued his opener.  “There are opportunities out there for a 90% grant if we can get the state to cooperate with us.  And there’s an act out there, called the Pittman-Robinson Act … it’s basically revenues generated from excise taxes of sales of firearms and ammunition, and are apportioned to the state wildlife agencies that are [sic] conservation efforts, hunting education programs and operation of archery and shooting ranges.”  Champion said with emphasis, “These ranges must be public-accessible.”

He continued, “There are guidelines.  There’s about $8-million dedicated to enhance hunter education, and President Trump has changed the match, that used to be 75% … there is now a 90% grant that we can potentially apply for – for the county, with state cooperation.”

“Let’s say we looked at Croom … or any conservation land owned by the state. We could say ‘We would like to have hunter education and / or public ranges available to everyone to practice safely, the shooting sports.’  This goes even further, because imagine, if we had cooperation from the state, we apply for this grant, and we create a range that is not heard of around here, it would draw people from all over the state or the country to come to Hernando county.”

According to Champion’s research, there are eleven public shooting ranges in the state, the closest one to Hernando is in Ocala.  Six are in south Florida.  “There is a whole huge void right where we sit.” Champion said.  “What better place to ask the state for a range better than Hernando county?”

“A lot of things would have to happen,”  Champion admitted.  Still a plausible idea, Champion suggested seeking direction from County Administrator Jeff Rogers and other staff, such as  Parks and Recreation Director Harry Johnson to identify potential locations for such a venue.

“The worst (the federal government) could say is ‘No’.” Champion said.  He also listed reasons as to why there are only eleven public ranges in the state; “It costs millions of dollars, typically, and there’s so much regulation, and the EPA … so if we had the state involved, and they donated the land and they participated … and they would probably run the thing too … that could be negotiated.”

“What better economic driver than to open a public range in the Nature Coast, where over 50% of the land will never be deeded to a private person, and is conservation land?  It’s safe.  You’re not putting it in someone’s neighborhood … and you give someone somewhere to go.”
Champion said he routinely receives calls from area residents who live on acreage who have had visits from law enforcement because they were shooting on their own property.  For property owners practicing on more than one acre, this is perfectly legal.

Commissioner John Allocco agreed with everything Champion presented, adding also that the residents with whom he has spoken are looking for more than “poking holes in paper.”  Allocco reported he has heard requests for skeet, trap and sporting clays.  He also added that he and his family visit a site on the Pasco-Hillsborough line for this type of entertainment.
“Education is key when you’re dealing with any kind of firearms or hunting or sports (equipment) in general. Accidents are generally the result of lack of education.”

Commissioner John Mitten, also in agreement with everything discussed to this point, added, “I think that research (should be done) into the mitigation of the lead and the ammo, and whether (the state) mitigate that or would the county be ‘on the hook’  for sustainability…”  Mitten also posed the question, “Just how much is that 10% (the county’s contribution)?  When we get to where we can handle that 10%, I think we should pull the trigger on it.”

Champion added that the 10% could come from anywhere, not just the county.  “If someone really wants their name on it.. Remington or Walther … there are opportunities out there to gain the funds.”

Considered an unlikely event, if a bond were to be considered, Champion is certain revenues from the range would repay it quickly.

As a part of his business, Champion is educated on gun ranges.  He investigated the possibility of installing his own indoor range, but decided against it due to the $2-million price tag.  He cited other restrictions that come with indoor ranges, such as the prohibition of rifles and shotguns, steel case ammunition and “being limited to a number of handguns, ‘poking holes in paper’,” earlier described by Commissioner Allocco.

Regarding the mitigation of discharged lead and other potentially hazardous material, Champion reported that the recovery of lead left on the site could be worth “hundreds of thousands of dollars.  There are actually companies that go out and mine the lead from the ground and backstops, and we get paid for it. The brass casings that are left … we get paid 5-10 cents each … they scrape it up, sell it to a distributor.  Guess what? Income.”

Champion speculates that such a range could be considered an attraction, and could be the most lucrative in the county.   Hernando county’s landscape of rolling hills and antique mines are also attractive in their uniqueness, as well as the ability to serve as a natural backstop for projectiles.

According to Champion, the longest range in the state is in Manatee County, at 600 feet.  A range exceeding that could mark Hernando as a destination for shooting sports.

County Administrator Jeff Rogers added that the county could not consider spending money on such a project for 3-4 years.  “This is not something the county would be spending money on in the immediate time frame.”  However, Rogers was optimistic about Hernando’s attractiveness for the grant, saying, “I think our county is very well provisioned for this … the Forestry department is already working with us a lot, and between FAMU and Richloam, these areas … are a very good opportunity.  We also have the 4-H Shooting Club, where all the kids there practice shooting weapons, and those students went to the national competition and won awards.”