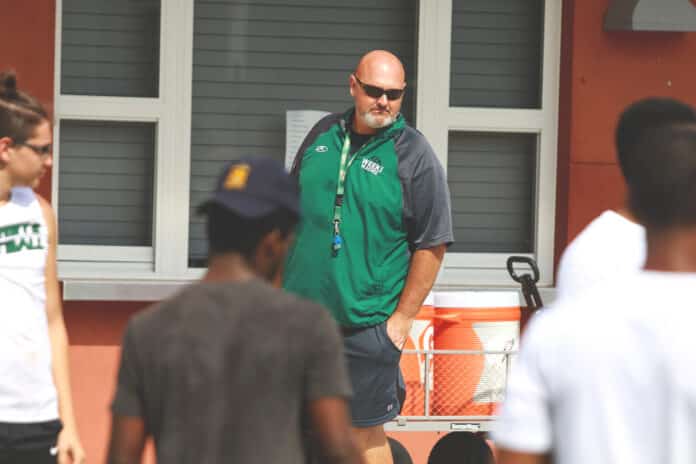 First year Weeki Wachee head coach Chris Cook realizes he has some work ahead, but the summer months have given him some time to make significant headway.
“Coming up here, I knew it was going to be a little bit of a challenge,” Cook said. “I knew the numbers were low, and I knew there were some things the administration wanted to change as far as the culture of the team.”

The spring game against Calvary Christian in May was a way for Cook to establish a checklist. He observed and evaluated from the sideline.
“Looking at it from February to now it was a little discouraging, but as a coaching staff, we kept marching forward,” coach Cook said. “This team did a complete 180-degree turn from when I got here. It’s completely different.”

Cook has taken summer break as an opportunity to focus on team building, filling skilled field positions, strength and ethics.

Cook tells his players that football is just one part of life, but the game is a good way to prepare you for the challenges ahead.

“I remind my coaching staff our number one priority is to mentor these young guys.  So when they become adults they can be good husbands, fathers, family members and productive citizens in society,” coach Cook said. “Number two is to win football games.”

Coach Cook said that he and his wife Cynthia, were so gratefully welcomed into the Hornet’s nest.  “It’s like I have been here my whole life,” said coach Cook.
Hornets will travel to Groveland to face South Lake in their first away game of the season on August 23.