What matters at the Brooksville City Council meeting? 07.15.2019 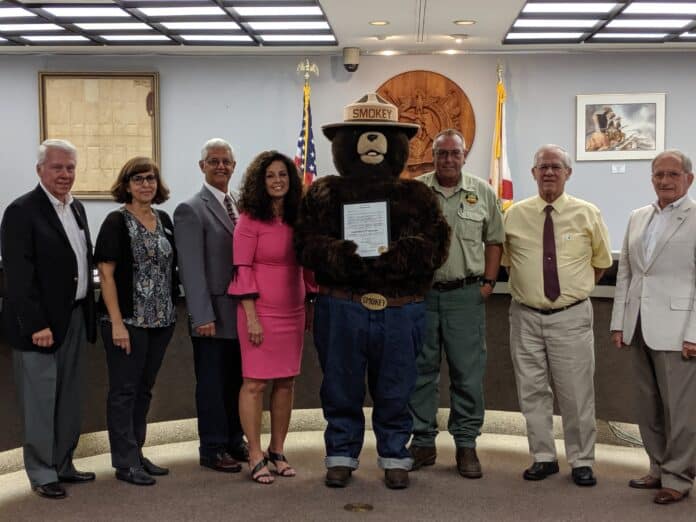 The votes on this resolution did not pass any changes to the fire assessment methodology, only to approve the reports presented and schedule a public hearing.

The council voted 4-1 to approve the resolution with the following amendments:

1- Show under Demand and Availability methods computing an amount utilizing $1,080,000 as the amount to be raised by the assessments.

2- The numbers within the resolution are to be carried out to a consistent four decimal places, and to include footnotes where rounding has occurred.

Council Member Pat Brayton voted against the resolution, stating he was uncomfortable with the three amendments.
Before setting the date for the public hearing, Robert Battista asked the council if the current venue would be adequate, anticipating a large attendance.  After some consideration, the council settled on keeping the next meeting at City Hall.   The public hearing will be on August 19, 2019 at 7:00 PM.   The regularly scheduled City Council meeting will be held following the public hearing, if time permits.  It could possibly adjourn that evening and continue the following day (August 20, 2019).
Before the votes and meeting time determination,  discussion continued from the last meeting, where the representatives from Bryant Miller Olive, P.A. and Stantec were directed to prepare notices regarding the Demand option.

Brooksville’s current “Availability” method is a two-tiered approach;  the first tier is a charge for all landowners, the second based on the value of improved property.  Other Florida cities using this method actually call it “The Brooksville Method.”
Chris Roe with the law firm of Bryant Miller Olive, P.A. gave a presentation, showing the differences in revenue for the city as well as tax increases or decreases for Brooksville residents.

Pat Brayton, who opposed the motion to move forward at the last meeting expressed concern over irregularities in calculations.  He also asked why the First Class Mailing expense for FY 2020 would total $23,900.  “If I’m going to spend that much in postage to notify 4000 people, I want to know why.”  The number amounts to $6.50 in postage per notice.
City Manager Mark Kutney referred to an email he received from Roe earlier in the day that stated postage was estimated $2,318.

Brayton said that he did not like the report due to that example, and stated that he could find “three or four more errors,” and questioned if any others existed that he overlooked.

Both Brayton and Mayor William Kemerer discussed with Stantec representatives the number considered residential dwelling units in one of the tables in the Stantec presentation literature.  Satisfied with Stantec’s explanation, Brayton was still not convinced of the accuracy of the report overall.

During citizen’s comments, two of the three speaking were in favor of the Demand method.  One citizen stated concern for possible substantial rent increases for mobile home renters.

The following items were approved in the consent agenda without further discussion.

Amendment to Interlocal Agreement for Records Management Approval to extend existing agreement (expired 7/8/19) for storage of files until September 30, 2019 continuing at a fee of $506.00 per month and authorize execution by the Mayor.

The agreement provides for a monthly rent in the amount of $506.00. This rent was calculated by the square footage the cabinets would occupy. The cabinets will occupy forty-four (44) square feet. As the custodian of the Brooksville Housing Authority records, any costs associated with records requests would be paid by the requestor. Payment for the first month was made in full.

Approval of awarding groundwater monitoring services to Creative Environmental Solutions as a sole source provider after posting notice for seven day period as required by F.S. and the City’s Purchasing Policy, and authorized execution by the City Manager.

Award of quote to Sunbelt Rentals, Inc., for sewer plug rentals for culverts in the amount of $906.20 per day and authorize the Mayor to execute proposal and standard contract addendum. 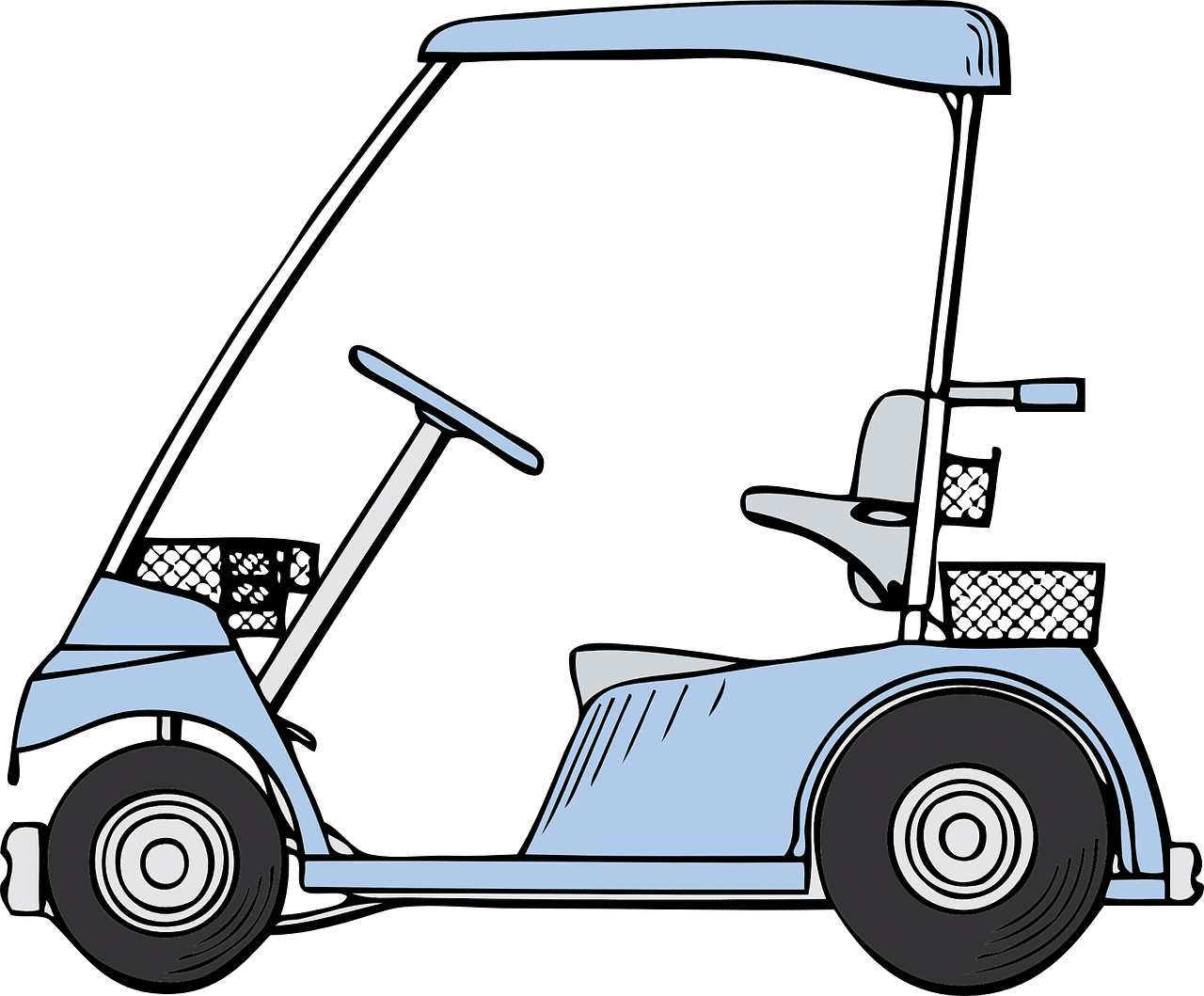 City Manager Mark Kutney addressed the recurring topic of golf carts, which was again mentioned during Citizen’s Comments.  Kutney addressed the question of why golf carts – which were once allowed in Southway Villa Mobile Home Park – are no longer.  Apparently at some point, a “very informal study” was done by the former Brooksville Police Department, but the results were never brought to council.  The decision was later rescinded, although no reason or timeframe was given.

City Attorney Becky Vose broke down provisions in the state law and what local governments are able to do.  Recent changes in Florida Statutes could mean trouble if a local government attempts to regulate areas that are pre-empted or prohibited under state law.

Florida statute 316.212 is the primary piece of legislation that governs what municipalities can and cannot do with respect to the topic.  Its top paragraph reads:

“A golf cart may be operated only upon a county road that has been designated by a county, a municipal street that has been designated by a municipality, or a two-lane county road located within the jurisdiction of a municipality designated by that municipality, for use by golf carts. Prior to making such a designation, the responsible local governmental entity must first determine that golf carts may safely travel on or cross the public road or street, considering factors including the speed, volume, and character of motor vehicle traffic using the road or street. Upon a determination that golf carts may be safely operated on a designated road or street, the responsible governmental entity shall post appropriate signs to indicate that such an operation is allowed.”

Vose deciphered the statute by saying that prior to designating streets on which golf carts would be legal, an official study would need to be performed, and recorded.

On the subject of operating golf carts on private property, the answer is generally ‘yes’, however, Vose mentioned two exceptions in this area.  The first being that if the road is generally open to the public (e.g.: an entry into a subdivision), then it would fall under the municipal rule.  Vose cautioned that this portion was an opinion by the Florida Attorney General, and not actually stated in the statute.

The second exception would be if a community actually contracted with the local law enforcement agency to allow regulation of golf carts.

Vose went on to outline how far regulation can go at the local level. Requirements which a local government cannot deviate from are safety issues, such as hours of operation (sunrise to sunset only), and equipment such as brakes, horns, lights and mirrors.  Another top-level law is that a golf cart may not be operated by anyone under the age of 14.

Vose also recommended that when the time comes, the council also explicitly state differences between golf carts and other low-speed vehicles.

Kutney reported on studies done in other cities to compare costs and determinations.  A study from Daytona Beach cost $16,100 for the first phase and a second phase for $15,800.  Kutney stated he was not clear on the purpose of the second phase of the study, but said it might have been an implementation plan.

Kutney also referred to a Miami Springs study by the Corradino Group, however there was no mention of cost of that study.

Kutney invited the council members to review both studies.

A cost of $5,000 had been mentioned previously for such a study done locally.  Kutney did say that the two studies he brought for review were full-city studies, and not a portion, as is the case that Brooksville is currently pursuing.

Second Reading of Ordinance No. 904 regarding property owned by Robert E. Bodiford, Jr.  Rezoning request from CPDP to C-2 for 3.4 acres located east of the intersection of Cortez Blvd. and Jefferson Street. 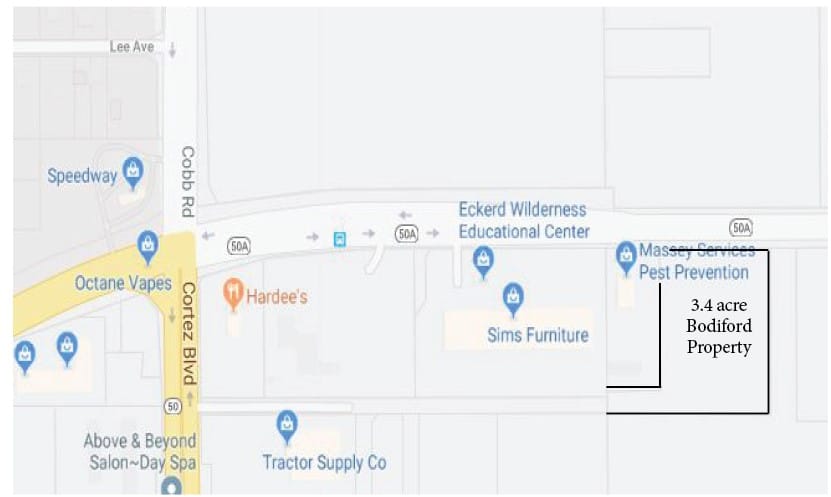 The petitioner seeks to rezone from CPDP (Commercial Planned Development Project) to C-2 (Highway Commercial).  The property, located on the south side of West Jefferson Street, approximately 1,412 feet east of the Cortez Boulevard/Jefferson Street intersection.  The general area consists primarily of commercially zoned and developed properties. Given the commercial character of the area, staff finds the requested rezoning compatible with the development pattern along this portion of the West Jefferson Street corridor.

According to Steve Gouldman with the Community Development Department, 90% of the property sits in a flood zone and any development would be an “engineering miracle.”
The petition was approved 5-0.

This ordinance grants Non Exclusive Franchise To Peoples Gas System, A Division Of Tampa Electric Company, For A 10 Year Term To Allow The Company To Continue To Operate And Maintain Natural Gas Service In The City Of Brooksville.
This has been continued again until August 19, 2019.