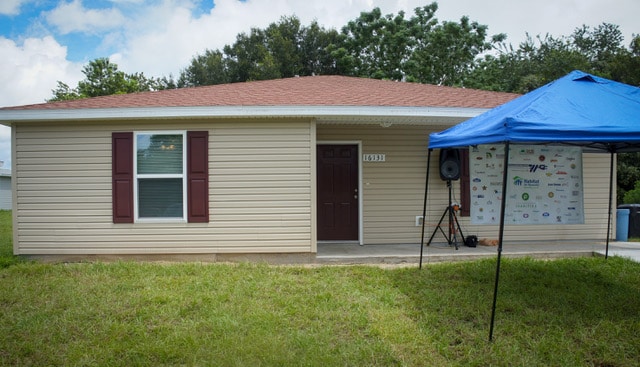 On Thursday August 7th, on the 1600 block of Daytona Street in Spring Hill, Habitat for Humanity of Hernando, a Christian based organization, held a ribbon cutting ceremony marking the culmination of their two newest home building projects in Hernando County.  Through Habitat’s “Homeowner Program,” two families applied and were approved for housing through Habitat’s home building program.

The ceremony, overseen by Habitat’s new Executive Director, Richard Sanvenero, began with an invocation and the recitation of the Pledge of Allegiance, the latter led by Gary Steele, Habitat Hernando’s Vice Chairperson.  Several members of Habitat’s board of directors, as well as the homes’ new residents, were present for the ceremony. Jerry Campbell, the owner of Dominos, provided pizzas for the ribbon cutting ceremony.

Before the ribbon cutting took place, Mr. Sanvenero took a brief moment to explain why the program existed: “Since Habitat of Hernando’s inception in 1996 they have existed as a non-profit housing organization operated on Christian principles that seeks to put Gods’ love into action by building homes, communities and hope.”  I got the chance to ask him who exactly would be a good candidate for the program. Habitat Hernando is geared towards providing low cost housing to: “People who are working who cannot afford some of the housing prices in Hernando County…like teachers, waiters, waitresses, there’s a lot of hardworking people in Hernando County who would probably be acceptable and get approved through Habitat’s guidelines.”

The two homes were built for, and with the assistance of, two local families (The Holland family and the Ford family).  Also heavily involved in the construction were volunteers from Publix grocery stores, volunteers from some of the local schools, and the Withlacoochee River Electric Cooperative. Publix and Withlacoochee each sponsored the building of one of the houses. Roofing is provided free of charge by Allen’s Roofing.  Other services such as plumbing and electric are paid for by Habitat. The program itself offers those in need, who meet a certain set of criteria, the opportunity to not only receive a new home but also participate in the construction and completion. Construction on the 2-bedroom and 3-bedroom homes began roughly 5 months ago according to Mr. Sanvenero.  While the homes are built through community, volunteer and local business support, those residing in the homes pay the costs back through a 30 year fixed interest free mortgage.

To learn more about Habitat for Humanity in Hernando County, how to get involved, and the programs they offer, visit their website at www.habitathernando.org.