Math Teacher Recognized in the Monthly Thank a Teacher Program 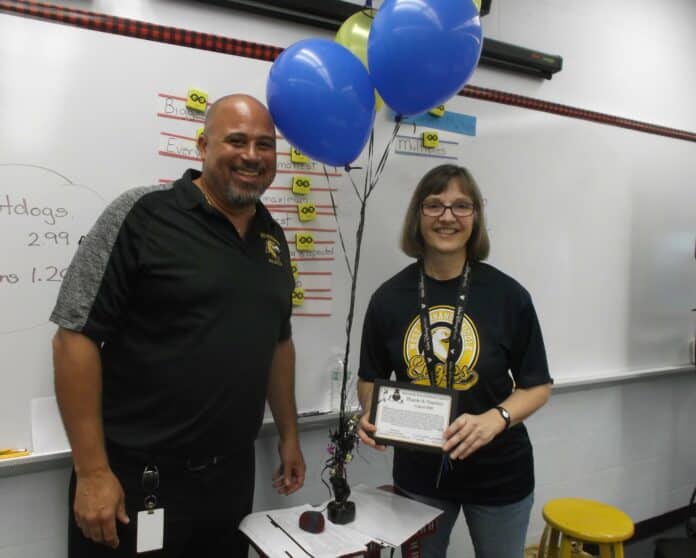 For Ms. Lorraine Armstrong, a sixth grade math teacher at West Hernando Middle School, probably started off last Friday Aug. 23 like any other school day: greeting her first period students and teaching her classes throughout the day. But the day ended on an unusual note when her last period class was visited by a group of people bearing balloons and cupcakes.

The group represented a contingent of school officials who were there to honor Ms. Armstrong with the monthly Thank a Teacher award. There to present the award were   John Stratton, Superintendent of Schools; Karen Jordan, Public Information Officer for the school district; school board members Linda Prescott and Kay Hatch; Tammy Brinker, Executive Director of the Hernando County Education Foundation; and Chris Healy, West Hernando Middle School principal.

The Thank a Teacher program is underwritten by the Hernando County Education Foundation (HCEF) and is done on a monthly basis throughout the school year. Nominations can come from students, parents, other teachers or anyone in the community. In the nomination, the person states why this particular teacher is outstanding and why he or she deserves the honor.

“Nominations were opened last week and within two days we had fifty-four nominations. The decision of who will receive the recognition is done on a collaborative basis between the Communication team at the school board and the schools’ staff. We try to have a balance of elementary, K-8, middle school and high school teachers,” Karen Jordan stated.

In addition to the fanfare surrounding this monthly event, the teacher who is chosen receives a plaque inscribed with a summary of the reasons why he or she was nominated and a “goody bag” with such items as a mug with the HCEF logo, water bottle and a certificate for an extra visit to the HCEF store on Emerson Road for free class supplies.

Ms. Armstrong was nominated by a parent of a former student. The parent stated that the boy had struggled with math, but that Mrs. Armstrong had so much patience with him and gave him a sense of confidence. She made math fun through the games they played in class. Once her son entered seventh grade he went back to Mrs. Armstrong for extra assistance, which she was happy to give him.

Lorraine Armstrong has been teaching for fourteen years. She stayed home with her children when they were younger, but after they were in school she started volunteering with the Head Start program in Pennsylvania.

“It was an amazing experience and I decided to get my teaching certificate. My original goal was to work in Elementary but realized there was a need in the math area,” Ms. Armstrong stated.

Teaching has challenges but is a very rewarding profession, as well. When asked to describe these rewards and challenges, Ms. Armstrong remarked:

“The rewards would be the small things – someone tells me that they want to be a math
teacher, the smile of a student when they get a concept. The most challenging thing is  trying to balance the needs of all the students in the class.”

After the presentation of the award Ms. Armstrong, along with her class posed for pictures. Then came the best part for the students – feasting on the cupcakes!

Hernando County is fortunate to have Ms. Armstrong as a teacher here. However, there are many outstanding teachers in the area and the community must support  these men and women.