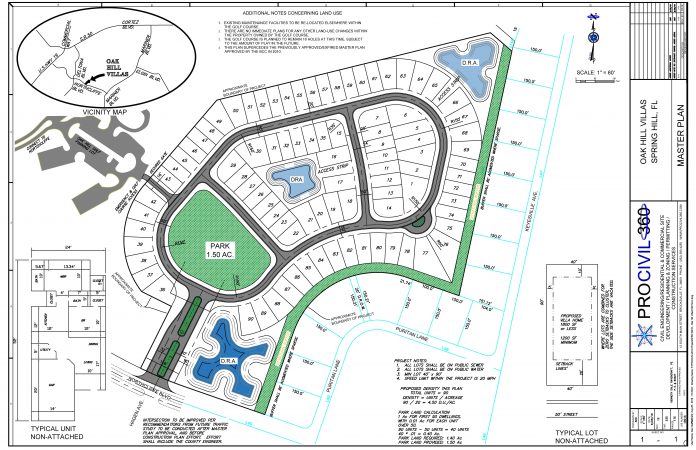 A large number of area residents gathered in a meeting room at the Northcliffe Baptist Church to learn more about a proposed development for an area on the southeast side of Oak Hill’s golf club.  The majority of residents are opposed to the planned subdivision, consisting of 90 home sites with the average home size of 1200 – 1800 square feet.  In a 45-minute Q&A session following the presentation, most in attendance raised concerns about traffic, crime, school overcrowding and effects on property values.

Alan Garman with local engineering firm ProCivil360, and his client, developer Tony Benge with the Benge Development Corporation presented the specifics to the residents at the meeting on September 3, 2019.

With an entrance from Northcliffe Boulevard, the property is bordered by Puritan Lane and Keysville Avenue.  The scaled drawing shows the homes along those streets to be buffered from the development with 30 feet of existing natural vegetation, which is to be augmented where needed.  A 1.5 acre park is the prominent feature residents and visitors are expected to see upon entry into the development.  The plan also shows three drainage retention areas (DRAs) ostensibly situated in necessary locations. The circular main roadway will contain two smaller roads providing connectors to opposite sides of the property. Additionally, a roadway will be built to connect to the current parking lot of the Oak Hill Golf Club, on the northwest side.

Several expressed concern that the development would mean closure of the Oak Hills Golf Club, however Garman and Benge stressed the opposite intention, and that the development is expected to bring more players to the golf course.  Oak Hills’ General Manager spoke briefly, quieting rumors that the course would close, and that he was working hard alongside his greens keepers and very involved in the daily operations.  Another question involved the rezoning of the golf course itself, however Benge stated that his interest is only in the area that would contain the homes, and does not include the golf course.

The development will also provide a smaller home option.

Benge, who is based in the Orlando area said that the “McMansion” of the mid-2000s is becoming less desired by home-buyers, and that the smaller sizes could serve as a “starter home, or your winding down home.” Concerned about the smaller lots and homes, most residents are fear the character of the neighborhood changing.  One area resident said, “You’re going to build these houses so people are on top of each other, and it will look like Miami.”  Benge explained that this type of development has been popular in recent years in metropolitan areas such as Tampa and Orlando. Several voices countered with, “This is Spring Hill.”

Benge expects the asking price for the new homes to be around $200,000.  One recent home buyer said, “(Maybe) in a place like Orlando … but you can’t guarantee that this is going to sell at the rate you’re anticipating.”

Minutes of discord broke out at several points.  Ranging from murmurs to shouted profanities, attendees expressed their concerns about sinkholes, school districting, and the possibility of the development becoming a haven for crime.

Drawing applause from the audience, a resident who lives on Northcliffe described the daily traffic tangle residents experience when Explorer K-8 students are heading to and from the school.  Benge explained that traffic studies will be performed, however the school traffic does not occur during peak times, such as 4-6 PM, and that the current traffic density on Northcliffe is about 40%, based on a previous study.

It was also stated that children living in the new development would not be able to attend Explorer K-8, since the school is currently at capacity.  However, with this meeting being the first of a long planning and building process, it is not currently possible to determine which schools would serve the future students living there.

Benge addressed concerns over the development degrading in quality and attracting criminal activity by stating that each of his residential developments have Homeowner’s Associations (HOAs) in place, and that the formal covenants are handled appropriately.   “I would not be investing my personal capital if I thought it was going to be anything remotely like that.”

Residents who wish to follow the process can attend Planning and Zoning Commission (P&Z) meetings, usually held on the second Monday of the month, and Board of County Commissioners meetings, held the second and fourth Tuesdays of the month.  Official hearing dates will be posted around the property, and will also be published in the legal notice sections of local publications.