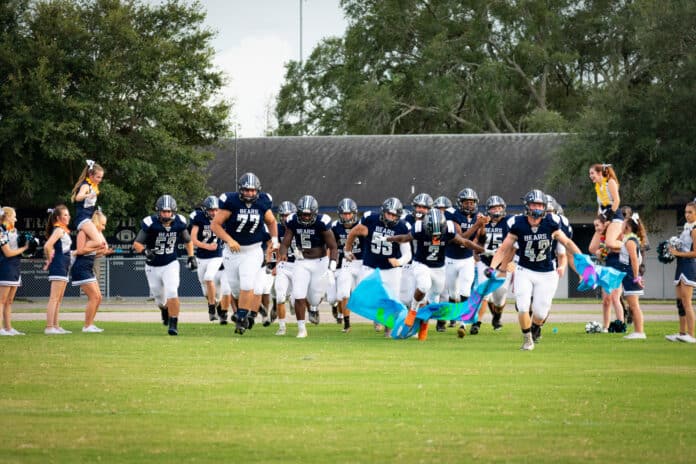 The Central High School Bears seemed poised to continue on a flawless winning streak on Friday night.  Prior to entering into the game against the Lecanto High Panthers, the Bears were at 3-0 for the season.

The Bears won the coin toss and the game was off to a great start.  Both teams came out to play hard. The first half was an aggressive match of strong defense and hard charging offense.

The true highlight of the night came from the performance of star running back Contae Cason.  Cason ran for an impressive 232 yards, ending the night with 16 carries and three touchdowns.

With one minute to go in the 1st quarter, Cason (#2/RB) rushed for 26 yards, putting Central on the scoreboard for the first time in the game.  It was not a great night for the Bears’ special teams, however, as most conversions and field goals were missed.  Cason continued his charge through the night with a 91-yard rushing TD with nine minutes remaining in the 2nd quarter, putting Centrals second TD on the board.

Cason’s third TD came at 8:07 in the third quarter, minutes before one of the biggest disappointments of the match.  A controversial call (unnecessary roughness) from the officials resulted in Cason being benched for the remainder of the game.  Tensions were high as an uproar stopped the game while Coach Walden and staff attempted to reason with the referees and defend their star player.

While Central High School put up a strong fight, Lecanto got the best of them and the game ended with Central trailing by 10 points.  The final score of Friday’s game was 34-24, Lecanto.

Hopefully the Bears will be able to glean some lessons from the defeat and put themselves back in top fighting mode before they face off against the Nature Coast Sharks on Friday Sept. 20.