“The train is starting to build up steam, boys.” 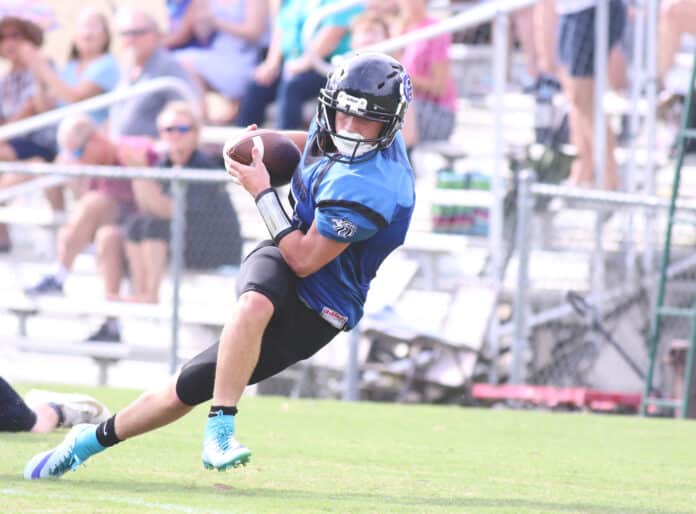 Hernando Christian Academy (HCA) had a solid win Thursday night against Cornerstone Academy. Cornerstone had one loss in 2018 (10-1) and went undefeated the year (12-0) before. The last time HCA played against them was back in 2016 at the semi-finals. HCA won 54 to 29. The Lions proceeded to the Championship only to fall to Geneva in a close game 36-39. HCA will face Geneva in Lakeland on October 18.

Seeing the Cornerstone players on the sideline for the first time after three years, they appeared intimidating in size, but at the end of the day the scoreboard did all the talking.

Jordon Kilcrease’s physical and strategic ability to maneuver around Cornerstone in their defensive mode put four touchdowns on the board. Andrew Santerelli, Reilly Decker and Zach Lechuga added more points to put HCA at 51-14.

As Coach Raley said in a previous article: “We are not the biggest or the fastest; we have to win by being accurate.” That pretty much sums it up.

After the game, the teams gather together and showcased great sportsmanship once again.

Coach Lance Swan and Coach Todd Klukowski spoke to the team. “The train’s starting to build up steam boys. Great job, I am so proud of you guys right now. The way you guys came out in the second half and totally shut these guys down was great. I love to see you guys coming together as a team, as a family, picking each other up, it’s great to see. Enjoy the win over the weekend, but know that if you all want to meet that goal you set for yourselves, we’ve got to start working again on Monday,” said Coach Lance Swan.

“Everyone is needed. Every single one of you is needed for this team. You want to go all the way, each one of you needs to recognize that. Noone is greater than the team,” Coach Todd Klukowski remarked.

The next two games are away: Solid Rock Community on September 20, and then league powerhouse Donahue Catholic High on September 27.

In 2018 HCA fell to Donahue at their first appearance losing 33-6. The Lions gave them a fight in their last game 26-20.
It is going to be a mental game against Donahue; however, there may be an opportunity to advance in play techniques against Solid Rock Community.

Box Score for HCA vs. Cornerstone