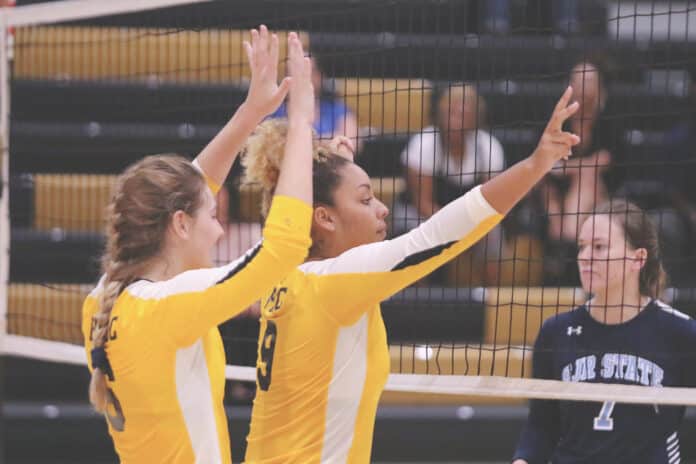 NEW PORT RICHEY, Fla. — Sometimes you just have to keep your eyes on the bouncing ball!

At the home of the Pasco-Hernando State College, a place simply called the gymnasium located in the middle of campus a crucial conference volleyball match drew a crowd. On Wednesday night Sept. 18 the Bobcats stepped out onto the court to take on a conference rival, St. Johns River State College.

Pasco-Hernando State College was defeated by St. Johns River State College 3-1, in front of a small but loud crowd inside the gymnasium.

According to Pasco-Hernando State College volleyball coach Deann Newton, she wanted no distraction for her team before the match against the Vikings. She just wanted them to be prepared and focused for the match.

The effort on display during the match for the Bobcats was present but the referees did get caught in the excitement of a good rally that had all the ingredients needed to move the fans from their seats to their feet to watch the point.

There were players making saves, players making strong hits that were dug out, plenty of players running to spots and making hits from what seemed to be impossible angles.

At the end of the rally it looked like the ball was hit long and was out by St. Johns River State College, the Bobcats celebrated the point but neither referees could decide whether the ball was in or out.

The decision was made without explanation to either coach and the referees decided to play the point all over.

Newton, already on her feet and watching her teamwork and sweat for what appeared to be a point for the Bobcats. She then looked at the referees with arms stretched out with her hands toward the ceiling of the Gymnasium, looking for an answer that did not come.

“I don’t know, I’ve never heard that before not in a tight match like that!” Newton said about the replaying the point. “It was a turning point of the match, I say we won the point but the momentum switched back to them.”

The play in the first set for the Bobcats was a struggle and the points scored by the Vikings seemed to put pressure on the Bobcats and they lost that set by the score of 25-17.

Newton described the second set as a match builder for the Bobcats, as they came out better focused. The serving by the Bobcats found the targets and the open spots in the Vikings’ defense.

St. Johns River State College put the pieces back together, the combination of strong net play created some confusion in the Bobcats’ defense and the Vikings came away from the third set 25-20, the fourth set is where the match was determined.

St. Johns River State College volleyball coach Matt Cohen said his team played hard and that is why they came back and won the match.

“I would rather not be in that situation- we came out and played really fast and played well in the first set. Pasco made some nice adjustment and they took it to us in the second set,” Cohen said. “In the third and fourth set we just found ways to win, we were in control in the third but in the fourth set we got off slow.”

During the fourth set rally, the charge was being led by two former players from Weeki Wachee High School, freshman outside hitter Brooks Sereda and freshman Seytia Hill.

Sereda possesses a thunder-like shot and she unleashed the power of that shot in the fourth set and Hill played tall at the net making numerous blocks of Vikings’ attempts to either just dump the ball over the net or spike the ball.

“You have to play smarter,” Sereda said about making the adjustment to college level volleyball. “We work together as a team- tonight’s game was a close match and we beat ourselves. We just didn’t follow through.”

Sereda’s teammate Hill said after the game that the Bobcats just need to learn to finish matches.

“I love playing here, I love my coaches and my team is amazing,” Hill said. “We have a lot of work to do before November comes around.”

Hill loves to play defense and making stops on her opponents.

“I like blocking,” Hill said. “We work well together but tonight we didn’t finish the match. We were up 17-10 and they came back to beat us. We have to work on finishing out.”

The volleyball season will continue next Wednesday evening Sept. 25, with a road trip to Leesburg, Florida to play Lake Sumter State College. The match is scheduled to begin at 6 p.m.

Newton and her team will be looking for that favorable bounce against Lake Sumter State College to even the season at .500 – that would be the right bounce!