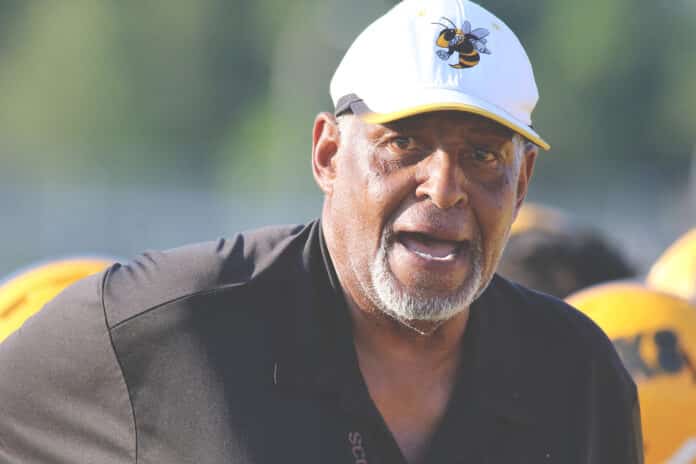 “It’s not all about football; it’s what you can learn,” said Winding Waters K-8 head football coach Hill.

Middle school football season began Sept. 17, and seven teams endured a month of hard work during practice. They are now ready and pumped to get this season started.

Challenger dominated Winding Waters with a 54 to 0 win, and despite the shut out, coach Hill says it’s not all about the wins or losses.

At this age in middle school, it’s more about the education; learning everything about the sport from ball control to blocking, and most importantly, safety.

“We teach them the fundamentals, so once we teach those, they are ready to go to high school,” coach Hill said. “It’s not about winning or losing it’s about decision making. Looking in the mirror and asking yourself did I give 110 percent, What can I do a little different to make things better for our next game. It’s not all about football; it’s what you can learn.”

Yellow Jacket’s Emily Becker and Emma Dickinson got to show how and why their contribution to the team is important as well as how they can handle being on the line.

“It feels really good to be part of a team; it’s a great honor to be on this team. We’ve gone through so much,” Emily said. “It’s really inspiring.”

“It feels good to be part of a team and part of something, it’s fun to be out here and enjoy the game,” Emma said. “Emily, she’s the one, I wouldn’t have made the team if she wasn’t on the team.”

Both Emily and Emma played Tuesday night and watching them from the sideline, and both girls toughed it out right along with their teammates.

“I’ve tried all those other girls sports they didn’t work out for me. When I went on the football team this was it, this is the sport I want to be in,” said Emma.

On the Challenger side, we previously met Lilly Swann before the season began. Tuesday night’s game finally gave her that competitive game experience, just as it did for Emma and Emily.

“It was exhilarating!” Lilly said. “I was glad someone else (another girl) was out there. She was really good at it, and she blocked really well, she did her thing. I am just glad we both had something in common. She knew how I felt, and I knew how she felt out there.”

Everything that the coaches teach move the student athletes forward. It’s not only about learning the fundamentals, but being conditioned athletically in strength and focus as well as mental preparedness.  That applies to any sport these kids participate in.

“We have our 8th graders start working in December after last season. They did the weight room; they did the run; they worked out all summer. This is their time to really play,” said Challenger head football coach David Barrett.

Upcoming game schedule- all games start at 6 pm. Games are subject to change; please refer to the school’s home page calendar for updates.