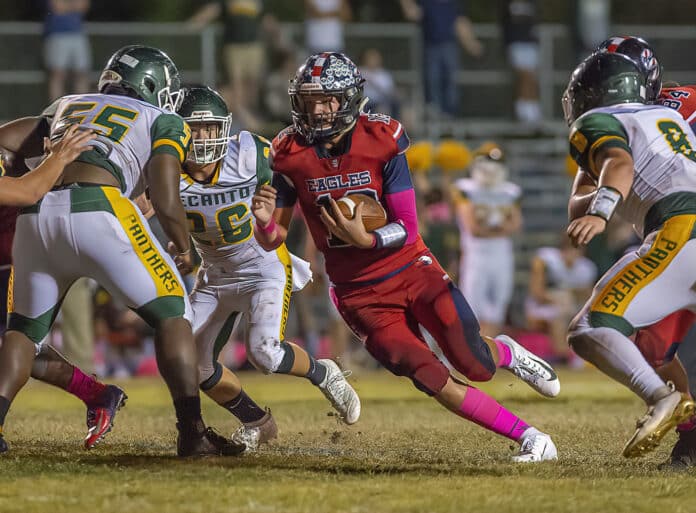 SPRING HILL- There’s only one undefeated team left in Hernando County and they reside in Spring Hill.

Springstead continued its march towards making history and finishing the regular season undefeated, as the Eagles rolled to a 40-0 victory over Lecanto last Friday at Booster Stadium. With the victory, Springstead now improves to 7-0 on the season heading into this Friday’s matchup against Groveland South Lake.

Quarterback Max O’Rourke was a big part of the win for Springstead, as the senior signal caller threw for 46 yards and a touchdown and also rushed for another 46 on the ground. The senior’s 92 yards of offense helped guide a balanced attack on the ground.

Springstead now gears itself up for a showdown against Groveland South Lake, whom is currently 3-4 on the season. The Eagles’ final three games come against South Lake, district rival Lake Minneola and Central to finish the season out.

Nature Coast 42, Weeki Wachee 0: The Sharks have gotten back to their winning ways after upending the Hornets big at home by a score of 42-0 on homecoming night. Nature Coast is starting to find some balance in the passing game between quarterbacks Fabian Burnett and Vaughn Sykora, both of whom have been platooning at the position. The Sharks have two huge games to finish out the season against Inverness Citrus on the road and versus rival Hernando.

Inverness Citrus 7, Hernando 3: One of the toughest losses on the season for Hernando has come via one score and the latest is a heartbreaker for the Leopards. Hernando’s slim hopes of winning the district came to a potentially screeching halt when they fell 7-3 on the road to the Hurricanes. Citrus was able to score the game’s go-ahead touchdown with 7:14 left in the game by running back TJ Weems. The Leopards have had their fair share of close calls and this one might sting the worst, as their upset bid would have ruined the Hurricanes’ undefeated season.

Crystal River 14, Central 6: Make that four straight losses in a row for the Bears, as they fell on homecoming night against the Pirates 14-6 in a defensive struggle. Central has relied upon the offensive talent of running back Contrae Cason, but the speedy runner wasn’t able to get around the Pirates’ defense.