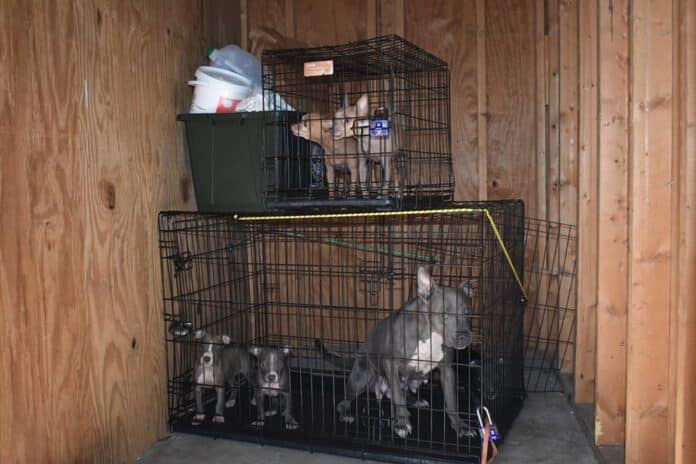 The caller stated that animals, possibly dogs, were being kept in a storage unit in the area of Hale Avenue and Dr. MLK Jr. Boulevard in the City of Brooksville.

Preliminary investigation revealed a self-storage facility to be located at 1000 Hale Avenue in Brooksville. An Animal Enforcement Officer (AEO) was dispatched to that location in an effort to locate the animals.

Upon arrival, AEO Mandy Rowe was able to locate a unit, in the back of the facility, that contained barking dogs. AEO Rowe observed a very large padlock securing the door to the unit and requested bolt cutters in order to gain access to the dogs.

A patrol sergeant responded to the scene with bolt cutters. A patrol deputy was dispatched to handle the call, which was now a criminal case, as opposed to an “animal complaint.”

Once the large padlock was cut from the door, deputies located seven dogs inside the unit. One white dog (male) was tethered to a very short leash. There was a bowl of water nearby. Two Chihuahuas were in a metal crate, on top of another metal crate. There was no food or water for the Chihuahuas. In the other metal crate was a mother dog and three small puppies (between six and eight weeks old). Again, there was no food or water for the mother and puppies. Additionally, there was absolutely no ventilation in the storage unit.

All dogs were removed from the storage unit and taken to Hernando County Animal Services to be evaluated by the veterinarian.

The owner of the storage facility is not facing any charges. He has been most cooperative with the investigation. The owner of the facility confirmed that the unit where the dogs were located was supposed to be vacant; the unit was not currently under contract with anyone.

Deputies are already receiving tips on this case, based on the photos and information released on 10-15-19. We are currently following up on each and every lead.

If anyone has any information regarding the owner of these dogs, please contact Deputy Steve George at the Hernando County Sheriff’s Office at 352-754-6830.

If you have information and would like to remain anonymous – Please call Hernando County Crime Stoppers at 1-866-990-TIPS (8477) or submit your tip via the internet at http://www.hernandocountycrimestoppers.com . You will remain anonymous and also be eligible for a reward up to $3,000 cash!

www.hernandocountycrimestoppers.com . You will remain anonymous and also be eligible for a reward up to $3,000 cash!