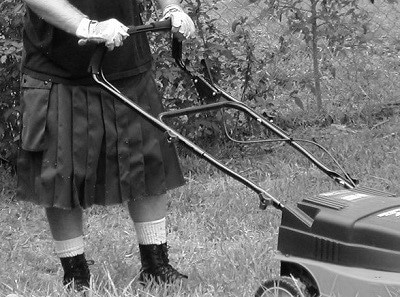 Earlier this year in New House I got in the shower and lathered up when suddenly I needed to go to the bathroom, number one.  There was no time to rinse and dry, so I peed there. I felt guilty. But then it happened again, and I didn’t feel so guilty.  In fact it felt natural, like when we humans spent our days hunting and gathering across savannas and in woods and peed as the need arose and didn’t have to aim.  I think I now understand kilts. The third time it happened I rationalized: it’s going to the same place as the other drains, and unlike the toilet, the shower floor is in constant flush and being rinsed with soap and warm water.  (My wife likes her water hot enough to redden lobsters, but I can only tolerate warm.) The fourth time, I started singing about it to the tune of “Smoking in the Boy’s Room”:

Went into the bathroom

To wash off all the grime

Lathered up, I didn’t know

I really couldn’t help it

But boy it felt so good

When I didn’t hold my blad

Peeing in the shower

I’m peeing in the shower

Even women do it

I’m sure that it’s true

But never ever think

It’s okay to do number two

Yeah, that’s disgusting, but I’m 764 months old and this is what happens in my head.  And of course I don’t sing that whole thing. I made up the rest of the song just for this, and I didn’t rewrite every stanza of the original.  I simply chant “peeing in the shower” for the few seconds it takes and then finish washing off. Oh I mostly use the toilet, and I always put the seat and lid down afterwards just for my Smeechiekins.  I pee in the shower only when necessary. However, I do confess that I sometimes hold it just for then.

But now I’m tempted to pee outside.  I thought about it years ago when my grandson’s other grandpa advised me that peeing around your campsite would prevent animals from entering.  The last time I went camping was with him, my grand-counterpart, and it was many years ago, but after that I wondered if it would work at Old House, which was fenceless and wide open.  I decided my bladder wasn’t big enough to mark the whole backyard. But New House is surrounded by a neighborhood that is plagued with a pestilence of pets, and while my new backyard is bordered by fencing, I will argue that there is a need to use eco-friendly repellent to prevent all vermin, from lizards to squirrels, and maybe feral cats and escaped dogs, from hunting and pooping on my property.  I take breaks and drink lemonade or plain water; enough during the four to six hours of the mowing ordeal that I could probably circle the whole yard and around each of my wife’s gardens. Mainly I’d just like to pee while pushing my Murray. I might invent garden kilts just for that.