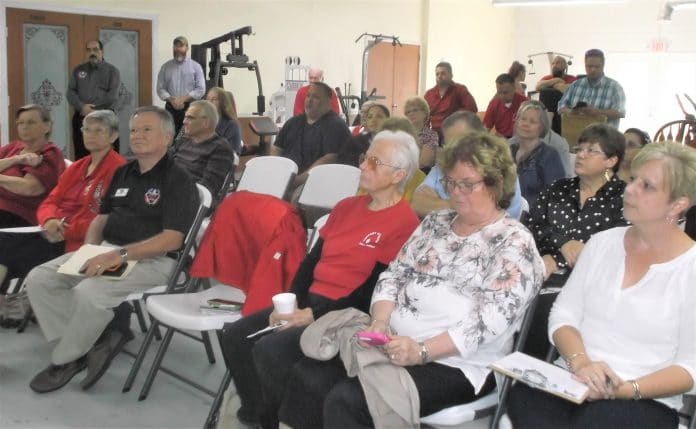 On Friday, Nov. 22, 2019 the Veterans HEAT Factory sponsored a free “Lunch and Learn” at the Joni Industries Building. It was open to veterans, first responders and anyone else interested in learning more about PTSD and what many of these public servants go through, as well as how to help them with these issues.

The guest speaker was Frank (AJ) Jones, a Veterans’ Administration (VA) Peer Support Specialist. He related his own journey dealing with PTSD and discussed PTSD signs & symptoms, plus what assistance and help is available to those dealing with this syndrome.

Jones was an army medic and served in Egypt. Due to his guilt at believing he had not done enough to help the occupants of a crashed helicopter, he started to experience PTSD. He came back to the states and started hearing voices. The doctors accused him of making it all up in order to get out of the military.

Jones became an alcoholic and ended up homeless. He was even Baker Acted several times. Sixteen years ago he started to turn his life around when he went to a homeless shelter. Jones got the help he needed to get on the road to recovery. One activity he did was writing out his traumas and then talking about them.

“I’m a firm believer that the healing is in the telling. Sixteen years ago there’s no way that I’d be able to stand up here and tell you to the extent of what I just told you, but every time I stand up and talk about this stuff I heal a little bit, ” Jones stated.

In addition to Jones relating his personal story of dealing with PTSD, two others also told of their experiences. Dale Madrishin was an Army veteran of the VietNam War. He mentions how he suffered from all the symptoms for almost fifty years. Back in the 70’s there were no programs to help veterans. Madrishin handled his negative feelings with alcohol. He attempted suicide four times.

“I’ve learned through this program that I do not blame everything on PTSD. That used to be my fallback,” Madrishin remarked.

Lucy Stasio was an officer with the Hernando County Sheriff’s Office for twenty-two years. She was diagnosed with PTSD more than ten years ago after someone attempted to kill her. She was given a three-month leave but there were no programs available at that time to help her deal with it.

“I didn’t want to admit that there was anything wrong with me. I just wanted to get back to work, so the doctor cleared me after three months. I kept sweeping those events under the rug,” Ms. Stasio explained.

But those feelings came out eventually. She felt her life coming apart. Eventually, she decided to retire without letting anyone know why because she knew they would judge her.

“After retirement, depression set in. I felt useless and worthless,” she continued.

Then several months ago, Lucy happened to run into Gus and he told her about his program. She started volunteering at the HEAT Factory doing whatever tasks needed to be done, cheering up people and also working through the program, herself. Now she has a purpose in life.

HEAT Factory was founded by Joni Industries owner Gus Guadagnino two years ago. It serves military veterans and first responders with PTSD (Post Traumatic Stress Disorder) or, as Guadagnino prefers to call it, – PTSI (Post Traumatic Stress Illness). Dale Madrishin, co-founder and Chief Operating Officer of HEAT Factory, and a veteran who suffers with PTSI, explains that they prefer that term because the word “disorder” has such a negative connotation.

The acronym HEAT stands for Honoring, Empowering, Assisting and Training. The organization fulfills its mission by offering support to these men and women through classes on anger management and managing relationships. Guadagnino has provided a large warehouse-size room at Joni Industries with exercise equipment for them to work out with. HEAT also offers yoga classes, art therapy and job preparation training, among its many services. They collaborate with other agencies, such as the VA, the Community Coalition and CareerSource.

Besides the veterans at the Lunch and Learn, other participants included several HEAT board members and representatives from local businesses and organizations.

Brent Henman served nineteen years in the Air Force and is a reservist at the present time. He worked as a military police officer. He was injured in combat in the Middle East. When he returned to the states, he did not take advantage of the programs to help him re-integrate into the family.

“I didn’t think I needed it. I was irritated and easily agitated. It caused division between my wife and between my children. I wound up getting arrested for domestic violence,” Henman explains.

He ended up in Veterans Court where he found out about the HEAT Factory program.

“I enjoyed the guest speaker today and his willingness to open up about things that are very personal to veterans,” he added.

Christina Gray is vice president of Global Jet Care, a local company that transports people all over the world who have medical issues. She came to the Lunch and Learn because she has a lot of military in her family. Last year her nephew committed suicide due to PTSD and she has another nephew who is dealing with it right now.

“We wanted to find out more about it [PTSD] and see how we could help. This helped us to understand better the people who are dealing with that.”

Veterans HEAT Factory is a non-profit organization and receives no government funding. Therefore, it relies on donations and volunteers to keep its doors open. If you are a veteran or first responder displaying symptoms of PTSD, know someone who is, or can help this worthy cause in any way, please call 352-251-7015 or log onto www.veteransheatfactory.com. You don’t know whose life you may be enhancing or even saving.