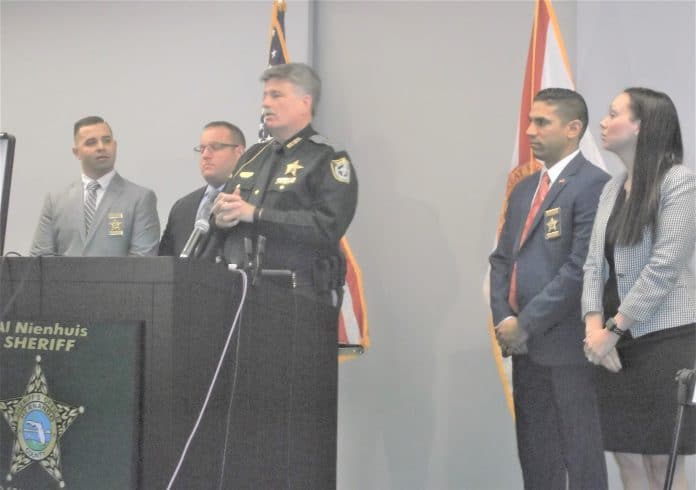 Sheriff Al Nienhuis held a press conference on Thursday, Dec. 12 to announce the successful conclusion of a manhunt that resulted in the arrest of three jewel thieves. Two of the burglars have a record of heists going back to the late 1990’s.

Michael Clarence Ornelas and William Anthony Granims were arrested in 1999 for a string of fifty robberies in the southeastern United States and sent to federal prison. After serving relatively short sentences, they were released. Apparently, the two either laid low for a number of years or they were not caught committing any burglaries.

However, in 2011 law enforcement jurisdictions in various areas of Florida started seeing burglaries done in a highly professional manner using similar methods. In 2013 and 2014 there were more burglaries – this time in Palm Harbor, Ocala, Punta Gorda and Lakeland that showed the same modus operandi. Then in 2015 and 2016, the thieves hit Hernando County with a string of ten heists.

All of these burglaries were carefully planned and executed. Each thief played his particular role. Granims, who, coincidentally, owned a security business, would disable the alarm system in an adjacent building enabling them to gain entry to the jewelry store. He would also monitor police frequencies to make sure there were no patrol cars in the area. Ornelas was the expert safe cracker – one of the top five in the world. Ironically, in his “day job” he was employed by Kay Jewelers (two of the stores hit) to open their safes when they were not able to. They took on as a partner Matthew Petrucelli who owned a thrift store where the thieves would sell some of the stolen goods. He would also act as lookout.

“We started putting two and two together,” Nienhuis remarked. “Law enforcement offices started talking to each other and we realized there was a pattern developing.”

In total, the thieves hit twenty-three jewelry stores in Florida resulting in a total loss of about $16 million in cash and retail value of the items. They were so adept at their “trade” that they spent weeks and sometimes months casing the businesses. They used sophisticated equipment to cut through adjacent walls and they left no physical evidence at the scene.

In order to finally catch the three, approximately sixteen law enforcement agencies in the state, along with the FBI cooperated by sharing information and resources. The beginning of the end came when a federal agent went into the thrift store owned by Petrucelli and spotted some jewelry he thought might be from one of the robberies. HCSO detectives went to the West Palm Beach FBI office and were able to positively identify the items seized.

Then, HCSO officers and FBI agents traveled to Chicago after getting information that the trio were planning several heists in that area. Petrucelli, Ornelas and Granims were arrested on May 19, 2018 while in the process of breaking into a jewelry store in a suburb of Chicago. Along with cash and jewelry, law enforcement seized high tech equipment. The thieves had a laptop computer that contained diagrams of every safe ever made and how to break into it.

The three burglars served time in Illinois for the crime there and were released. Granims, 57, is now in custody in Florida. Petrucelli, 67 and 56 year-old Ornelas are in the process of being transported from federal prison to Florida and will be arraigned here. They will face multiple counts of burglary along with other charges.

According to Nienhuis, these series of burglaries between 2011 and 2018 total one of the largest of these types of crimes in the state of Florida, especially as they relate to jewelry stores.

One of the local stores hit was Dan-Lo Jewelers owned by Dan and Denise Short. It was robbed in September 2017. The couple was devastated. They lost, not only a sizable portion of their inventory, but also a large sum of cash that was in the safe. Insurance covered only a small percentage of their loss. Mr. and Mrs. Short have not had any of the jewelry returned to them, including personal items stolen, because the goods are being held as evidence.

“I want to thank the sheriff’s office. They didn’t give up. I lost over $1 million that I had been saving for over forty years for my retirement,” stated the seventy-four year-old Short. “I have to rebuild and, hopefully, I’ll live long enough to retire.”

Mrs. Short commented, “I hope that they [the three suspects] get put in jail for the rest of their lives. They mostly hit “mom and pop” jewelry stores in small towns. You put your whole life into that store.”

The news media focuses a lot of its coverage on violent crime. However, non-violent acts such as the ones that Petrucelli, Granims and Ornelas perpetrated have a tremendous impact on the individuals, the community and the economy.