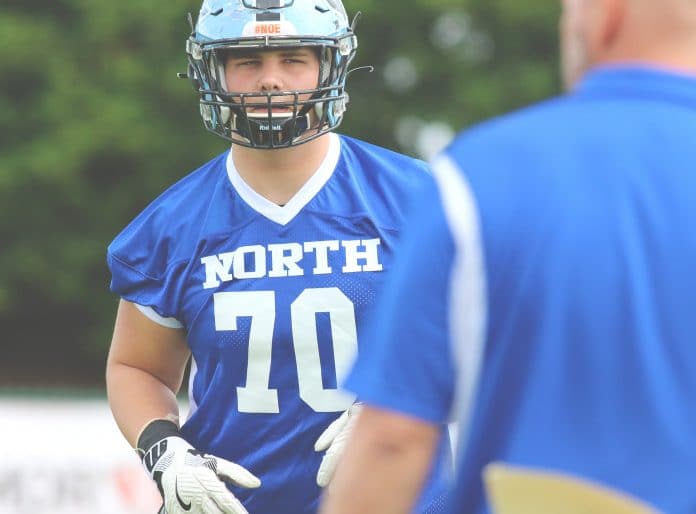 The Florida Athletic Coaches Association has a 60 plus year history. To this day, the association continues to provide inspiration and perseverance for a wide range of student-athletes across the great state of Florida.

Nature Coast Technical entered the season as a leader in the 5A District 8, but they had some downfalls early on.

“We knew there was going to be some problems with fixing small things, like certain blocking types,” Marotta said. “We thought we had it in the bag, and I think we got a little bit of overconfidence going into week two. It set the tone for the next couple of weeks.”

“Sometimes we wouldn’t want to do the little things and wouldn’t finish something. It all added up,” Marotta added.

Despite some tough losses, the Sharks went on to take the Regional Quarterfinals title against the 5A leader Citrus on Nov. 8 with a commanding win 28-6; however, they fell to Jones High School, 35-14 in the Regional Semifinals.

“I remember how much I loved football from playing from when I was little.” Marotta was planning to start on varsity in his Sophomore year but broke his arm during a JV game.

“Going into my Junior year, there were a lot of players for my position. I think I was a little overconfident and got my spot taken by another person. That really changed me. That gave me that hard-working mentality,” Marotta said.

In the 2019 season, Marotta grew, not only in physical strength and mentality.

“I thought I would never be at that caliber of play, and here I am.”

Springstead had an incredible 2019 season, with a 9-2 record under seven-year head coach Michael Garofano.

“My freshman year is one of my favorite years for the reason: I was an underdog,” Cabrera said. “I had to fight for my position, fight to be noticed.”

His junior year, Cabrera said, was his most significant year. Ranking up over one hundred sixty tackles and breaking school records.

According to Cabrera, over the three years, he strengthened as a linebacker. By the fourth year, those opposing players began to take notice.

“This year was a little tough on me, I had to overcome multi-linemen targeting me,” Cabrera said.

During his senior year, just three games into the season, Cabrera suffered an injury and was out for three weeks.

“I had a really big role in playing this year whether or not I was playing,” Cabrera said. “By my third game, I had an injury which took me out for three weeks, and that was probably the most adversity I had to face out of all four years.”

“Watching my team play from the sidelines and not being able to be a part of it, I feel it only boosted my leadership ability. Because whether or not I was on the field, I was still being a leader and motivating my teammates,” Cabrera added.

Cabrera said that the difference between his freshman and senior year was that the team had more than a few leaders. He felt like everyone played a leadership role on the Eagle’s team, and that made the difference in the records from last year’s 7 wins -3 losses to this year’s 9 wins -1 loss with five shutouts.

“I appreciate my coaches for carving me into a stronger individual these last four years. ”

“It allowed me to focus on myself a little bit more. They all were really smart and determined and driven to win,” Marotta said. “On the line, we’re still playing at the same speed we would normally, it definitely didn’t slow down, but we are playing against really good competition.”

Even though the North lost 26-21 against the South, they fought to the end and stayed strong even until the last intense minutes ending the fourth quarter.

“Playing in the FACA game this week was probably the best thing for me, I feel this has re-motivated me,” Cabrera said. “It was a great weekend and I learned that I am still the same shining fire spirit eagle I was when I was a freshman.”