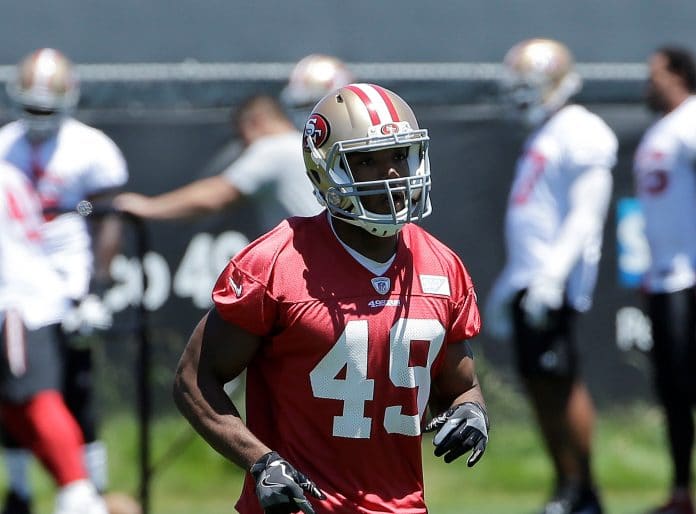 The San Francisco 49ers have been one of the top teams in the National Football League this season and they are inching themselves one more step closer to taking the No. 1 seed in the NFC. They took another step in that direction last Saturday night when the 49ers were able to defeat NFC West rival Los Angeles Rams 34-31 in a primetime matchup. Now the 49ers have a chance to win the NFC West crown and lockup a home field playoff game when they face the Seattle Seahawks this Sunday night Dec. 29, 2019 when they travel up to the northwest.

One of the big reasons for San Francisco’s ascension towards the top of the NFC Conference has been the tremendous play by the backfield mates of Tevin Coleman, Raheem Mostert and former Nature Coast Technical running back Matt Breida. Breida is amongst one of the three running backs that has rushed for 533 yards or more this 2019 season.

Breida’s season started off fast but has simmered down as of late due to some untimely injuries late in the campaign. The former Sharks’ tailback has rushed for 607 yards on 119 carries for an average of 5.1 a carry. Breida has also been effective in the pass game, as the running back has caught 19 passes for 120 yards. Though touchdowns have been hard to come by, with just two on the season, the former Nature Coast star has been very effective on the ground and in the air.

The former Georgia Southern product Breida was able to total between rushing and receiving 1,075 total yards from scrimmage for the 49ers. His best game of the 2018 season came back on Sept. 16 against the Detroit Lions, when Breida rushed for 138 yards on just 11 carries and scored a touchdown. Breida has yet to break the century mark of 1,000 yards in a season but with the way San Francisco’s offense operates under Kyle Shanahan, the 49ers employ more of a running back by committee.

Breida has had a legendary career since leaving Nature Coast, as the former Shark rushed for 1,485 yards back in 2014 as a sophomore at Georgia Southern. That total was the second most all-time collegiately to Adrian Peterson (Oklahoma), who currently plays for the Washington Redskins. Then in 2015 Breida boosted his statistical prowess to 1,609 yards rushing.