Not just a toy 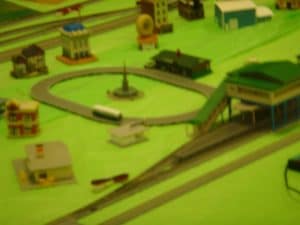 Since the early 1900s, model trains have chugged through the living rooms of American families. And on January 18, these miniature models of classic transport will be out in full display at the Hernando Fairgrounds, when Regal Railways will present the Toy Train & Toy Show.

This show has itself become a tradition, gracing Tampa Bay event halls for more than 15 years.

“We’ve been going since back in 2004,” said Joe Schramm, show organizer.

And as a model train hobbyist, Schramm has been going a lot longer.

“I’ve been collecting model trains since I was a teen-ager,” he said. “And I still love playing engineer, running the trains.”

Now Schramm is the owner of Regal Railways, which promotes toy train and collectible shows and sales and sells model train items through an eBay store at https://www.ebay.com/str/regalrailways?rt=nc&_oac=1. A running train layout courtesy of the Suncoast American Flyer Enthusiasts will be on display at their Brooksville show, where vendors will offer model trains, toy cars and other popular playthings, antiques, and crafts.

“This show is intended to promote an interest in model trains,” he said. “A hobby that has been giving people something to do for many years….This is a relaxing hobby with historical value.”

Indeed, on display at these shows can be found prime examples of vintage model train brands such as Lionel and American Flyer–brands first manufactured in the early 1900s.

“I’ve seen models from as far back as pre-World War I,” said Schramm.

And in tandem with the trains, Schramm also sees a generous and bountiful family spirit running through the Regal Railways train and toy shows.

“You see a lot of grandparents and kids walking through the shows together,” said Schramm. “This is a family function.”

The family tradition is as old as the hobby itself, with a 1933 American Flyer catalogue encouraging children to share their hobby with their parents (https://www.madeinchicagomuseum.com/single-post/american-flyer). And the invitation to the Jan. 18 Regal Railways show encourages families to “bring your children to the show.”

And while many early toy train catalogues make reference to grandfathers, fathers and uncles sharing their collections with their sons and grandsons (although a 1915 American Flyer announcement does show a little boy and little girl running a model train set side by side–https://www.madeinchicagomuseum.com/single-post/american-flyer), today’s model train hobby proves popular among all genders.

“At one show, I saw a collector buying a train set for their granddaughter,” Schramm reveals.

Additional vendors, including a lunch vendor, are being sought for the Regal Railways Toy Train & Toy Show. If interested, call Joe Schramm at 727-244-1341 or visit http://regalrailways.com/contact-usregal-railways/. The show will be presented 9 a.m. to 2 p.m. Saturday, Jan. 18, at the Hernando Fairgrounds, 6436 Broad St., Brooksville. The admission is $5 for adults, children under 12 are free.

The ultimate goal of the show, says Schramm, is to keep the train of tradition chugging along, in this area and beyond.

“We need to keep the momentum of the model train hobby going strong.”