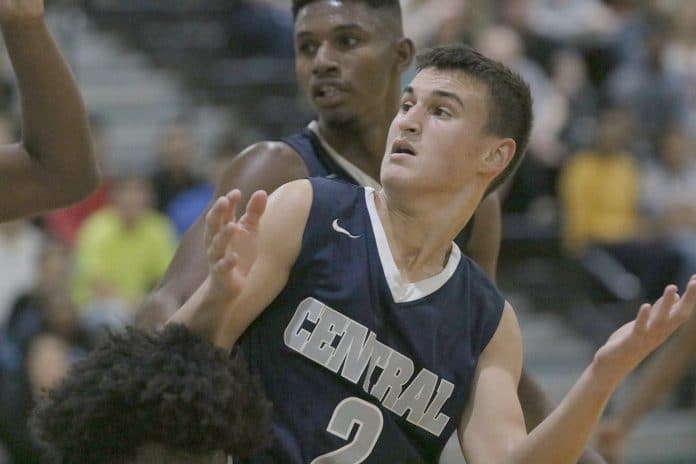 BROOKSVILLE, Fla. — It had all the ingredients necessary for a classic game!

Nature Coast Tech High School basketball coach Dave Pisarcik had a game plan for his team to follow and in the first half, the Sharks’ execution of that game plan worked. It was the best half of basketball this season for the Sharks.

The offense was deliberate with the ball in the offensive zone. The passes worked around the perimeter with precision, getting the Bears’ defense unbalanced and then driving to the basket with the ball.

When the Sharks’ defense faced the Bears’ offense, Nature Coast packed the middle of the lane and forced the Bears into some bad decisions with the ball, poor shot selection and it was the Sharks that were in position for a defensive rebound.

At the end of the first half, only four points separated the two teams.

The story for the Sharks did not change at the start of the second half, once again the season-long problem of not being able to score points and struggling on the court began for the Sharks.

In the third quarter the Sharks had at least nine opportunities to put more pressure on the Bears from the free throw line but only converted three times from the line.

Pisarcik said at the end of the game, that one of the simple things that could have prevented the overtime would have been the ability to make free throws.

The ability to make a simple uncontested layup attempt would have helped the Sharks.

With the seconds slowly disappearing in regulation and the Sharks struggling to keep the lead, the ball found its way into the waiting hands of senior forward Philip Scalise and for just a brief second he looked around to check for any Bear defender, there was nobody. He lifted up from the floor under the basket and his layup attempt went up, teased the crowd with the ball dancing on the basket and then the ball fell off of the rim.

As the ball fell onto the floor and with everybody on the Sharks bench standing in shock, Bears guard Deshawn Brown picked up the rebound, passed the ball to Talon Bergantino, he found Contae Cason alone in the corner and he hit the game tying three point basket, sending the game into overtime.

“Proud of the boys, we faced adversity we are going through a tough time we lost four out of our last five we were down late, we had a couple of plays go our way,” Central High School basketball coach Matt Zandecki said outside his happy locker room. “At the end, they play hard. Win or lose I was proud of them going to the final buzzer. I am proud of the effort.”

Still in a state of shock, the Sharks struggled in the overtime session, the Bears went to work and scored seven points in the extra four minutes and then waited for time to expire.

Pisarcik said he still has a lot of players in different positions learning how to execute in those positions but one lesson that the Sharks need to learn is the art of making free throws especially against cross county rivals.

“We were scrambling a little bit and he has got to hit it!” Pisarcik said about what he saw from the bench area as Cason’s shot went up. “Bottom line is that we didn’t do what we were supposed to do to seal the game. We gave them an opportunity, we missed a lot of free throws tonight, that we have to make in these kind of games.”

Nature Coast Tech High School will cross the county and walk onto the court of Springstead High School, Tuesday night, Jan. 14, inside the Nest to take on the Eagles. The varsity game is scheduled to start at 7:30 p.m.

The atmosphere at Springstead High School should be full of anticipation for a new classic out on the wooden floor of the Nest. There should be plenty of noise, excitement and drama out on court with all the right stuff for- an instant classic!