HomeUncategorizedPolitical analyst on 2020 election: most sure thing is things will...
Uncategorized

Political analyst on 2020 election: most sure thing is things will change 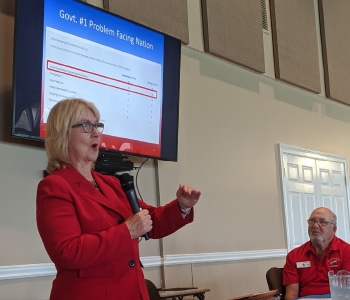 On Saturday Jan. 11, 2020 Dr. Susan A. MacManus gave an update on what to expect from the 2020 election.  She is a political analyst for ABC Action News and will be attending debates and inauguration on their behalf. She is a professor emeritus of public administration and political science and past chair of the Department of Government and International Affairs at the University of South Florida.

Dr. MacManus who does not have a political affiliation spoke at a meeting of the Timber Pines Republican Club. Her update was informational and did not lean toward either side of the political aisle.

She expects Florida to be inundated with election ads this cycle because Florida is the premier swing state due to a diverse population, very close elections and it’s relatively representative of the nation as a whole. The margin of victory in Florida elections has been shrinking. Recently it has been less than half a percent. Florida is a microcosm of the larger nation with very close registration number, lots of diversity, and large numbers of rural, suburban and urban residents.

Florida is also changing. As a result of the devastation of Puerto Rico a few years ago, many residents of the island have moved to Florida. Sarasota which was considered reliably Republican a few years ago is now a toss up as Sarasota has become more urban.

Dr. MacManus mentioned that some Democratic Political Action Committees are planning to spend more on state elections this cycle. This will most likely lead the Republicans to match the spending on the state level elections.

She identified several trends that are being watched during this election cycle. The trust in the media is declining which is an ongoing trend, but trust in social media is also declining. The fastest growing party is no party affiliation, many of the younger voters are choosing to not join political parties.

News saturation and the short time period that issues are covered is making it impossible to know which issues will be important in the election. Issues that are considered very important a few months before the election may wind up having little effect on the election.

This year there are expected to be three to twelve amendments to the state constitution. The amendment seeking to set the minimum wage appears to have already met the criteria to be on the ballot. Even if a constitutional amendment passes it often is up to the courts to interpret what was really meant by what was passed. The felon voting rights which passed over a year ago is still being litigated.

The ethinic groups in Florida tend to have a strong impact on elections. The Florida hispanic population splits along counties of origin to the different parties. The Africian American community has traditionally been solid supporters of the Democratic Party since the latter middle part of the 19th century, but recently there has been movement there. School choice is seen as the major issue that is causing fractions in that previously solid voting block.

The voting patterns are changing with around half of the voters either voting early or by mail. This means that candidates are basically running two elections. One election is early voting and the other is the election day voters.  A campaign may employ different strategies to target voters at these different times. If a campaign peaks on election day it might be too late since half of the voters have already cast their ballots.

Dr. MacManus summarized her predictions by saying that the most sure thing at the moment is that things will change before the election. The major issues have not been identified yet and many issues will come and go before the election. One thing she is confident of is that many of us will be sick of the advertising and coverage by the time that the election is over.