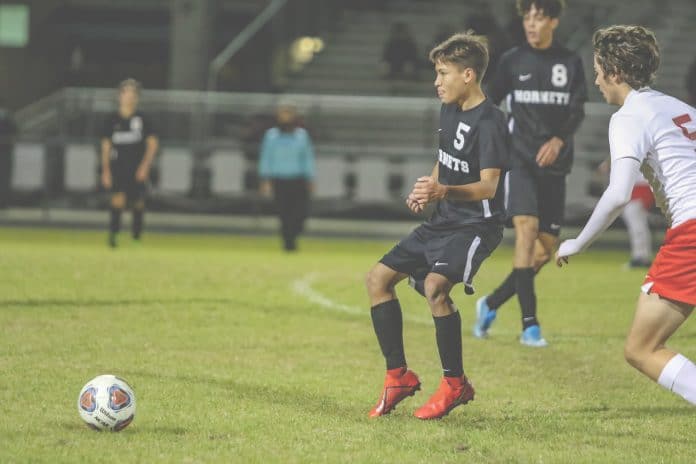 Weeki Wachee, Fla.– The Hornets had no mercy for the Springstead Eagles during the match on Tuesday night. Weeki Wachee’s defense held strong against Springstead’s tireless effort to score on the Hornet’s goalkeeper Lucas Zammit.

“We are blessed with a group of kids that came together,” Weeki Wachee Coach Shane Tarbox said. “I always talk to the boys about being men of character first. We try to stay disciplined as far as possessing the ball, and our communication is something we constantly work on during practice to help possess the ball. From there, they have great relationships with each other that carry over onto the field.”

The win could be the beginning of a comeback. Weeki Wachee had a rough couple of games towards the end of their season in January with the Hornets suffering a three-game losing streak and two ties.

“We kind of hit a wall after the Christmas break. After the two weeks off, we’ve been struggling to get back on the winning side of things,” Tarbox said. “We just keep focusing on doing the things we know how to do, and our last game against Springstead turned things around and created some momentum going into next week’s game.”

Ending the regular soccer season 11-4-3, Weeki Wachee had a bye week on January 31 and will proceed to the semi-final district match against Citrus on February 4.

“I think the top three schools, South Sumter, Citrus and ourselves are going to be pushing hard. We split the regular season with Citrus, we beat them at home, and they beat us at home, and we both tied South Sumter. Of course, that first game between Citrus and us is going to set the tone of what the tournament is going to look like.” Tarbox said.

“The team that shows up and makes the fewest mistakes and wants it more is going to come out on top, it’s going to be a good game,” said Tarbox.