Big Blade for a Big Boar 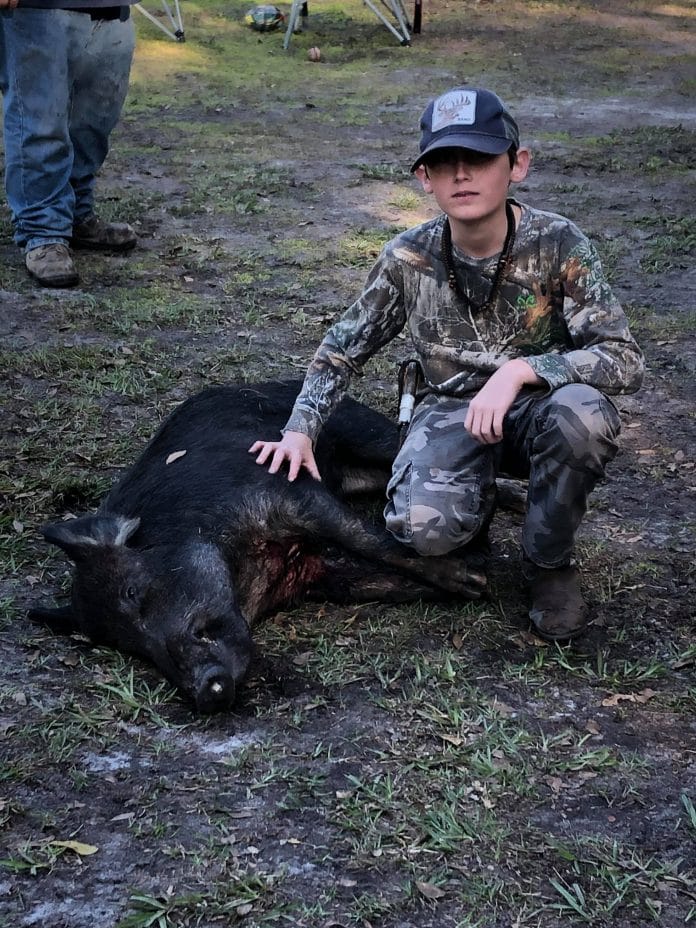 This past weekend I was honored with an invitation to carry a special young man to hunt his first hog on a beautiful ranch near Polk City, Fl.  Thirteen-year-old, Hunter Geer is new to the hunt although he did find success on his first whitetail this past November. But, when I extended the invitation to hunt hogs, he didn’t hesitate.  Naturally, I had checked with his parents ahead of time and was mighty tickled to have the chance to get the little man back in the woods.

The morning hunt, this past Saturday, was cold and clear and nothing was stirring about.  The feeder had spun, but there wasn’t a hungry hog although there was the sound of a hot gobbler in the distance who was safe for the time being.  I had given Hunter his choice of hunting opportunities for that day; we could hunt hogs there or travel further south for a gobbler…. he chose a hog.  But, still hunting on a timed feeder was not the key to success that day.

After a wonderful lunch with lots of good friendship and strategizing, a different plan of attack was made and ranch owner, Mister B J of Polk City, loaded a pair of Florida bred, Blackmouth Cur dogs onto his side by side ATV and set out to locate a sounder of wild hogs.  Hunter, was nervous about what was to be expected of him in order to conduct the harvest, but steeled his nerves and committed himself to the hunt. When those two bay dogs struck and sounded out that they had one backed into a thick stand of palmettoes, Mister B J and Hunter began quick-stepping through the dense jungle-like forest until they arrived on the scene.  The impeccably trained cur dogs were signaled to stand back as Hunter circled the hog to within striking distance and ended the encounter with a quick thrust of his blade into the vital region.

For those who have never tried harvesting an enraged wild boar with a fixed blade, I can think of no way to accurately describe the experience here in print.  It’s an experience you simply have to attempt for yourself to understand the adrenaline rush. The sight and sounds of the dogs baying wildly and crashing about through the dense brush, the boar roaring it’s rage back to the dogs, the rush of running into the fray at spitting distance with the boar swirling and charging, attempting to kill his antagonists.  You begin a circling dance, staying out of reach of the slashing turshes and time your opportunity to strike, then leap clear of those rising turshes, seeking to return the blow.

It gets pretty intense, but I had discussed what to expect with Hunter many times prior to his hunt and he did perfectly.  And a bonus to his success? His little brother’s birthday party will be held next weekend and he’d asked their parents if they could serve pulled pork.  Wearing a mighty wide grin, Hunter told me, “Owen doesn’t have to worry about his party now. I got him covered!”

As always, I’d sure love to hear from you if you have any feedback or maybe a story of your own you’d like to share, at [email protected]  God bless and good hunting!