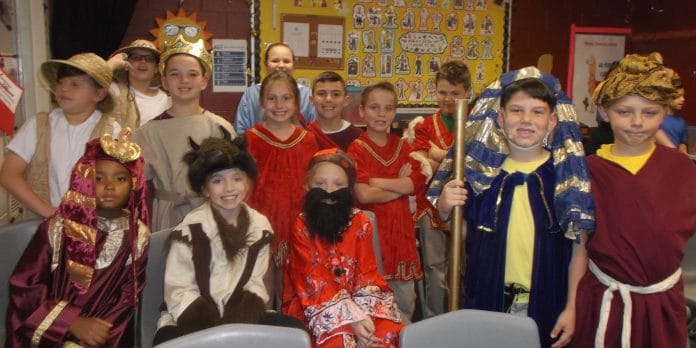 Don’t tell Chocachatti third graders that History is boring. They’ll most likely disagree with you. Thursday, February 27, the entire class put on a musical entitled “Dig It.” Directed by Drama teacher Irmarie Kraft, the play featured historical and mythological figures from ancient times. Ms. Nancy Kraus handled the music and Ms. Rhonda Bowers was the choreographer.

The musical presented snippets of the history and mythology of Mesopotamia, Egypt, China, Greece, Ethiopia, and Rome. It included innovative dance numbers and clever songs. For example, one of the numbers in the Greek segment was called “Greece is the Word.” Another from the Roman segment was entitled “Toga Party Tonight.”

In the play, two explorers from the year 1977 go back in time and meet a 3 million-year-old skeleton who takes them on a tour of the ancient world. Along the way, they meet figures from history and mythology. Among the figures is King Gilgamesh of Mesopotamia, Confucius, Sophocles, as well as Romulus and Remus.

It was obvious by speaking to the students that not only did they learn their lines, songs and dance steps, but they also learned the story behind their characters.

Dahlia Devito discussed her role as Confucius, “He was a teacher and he was very wise. The hard part was timing the lines [I speak] with the music.”

Logan Nolan, who plays Gilgamesh, the king of Mesopotamia commented, “He listens to other people’s plans to find better ways to transport goods to market. It’s fun to be speaking as the king and I liked dancing and singing in the show.”

Maya Mulligan who played the part of Lucy, the skeleton, remarked, “The most fun part of being in the play is getting to dance.”

Aiden Passarella and Mason Brock, respectively, played Romulus and Remus. According to mythology, they were twins who argued with each other regarding where the city of Rome should be built.

Aiden commented, “I play Romulus. I kill my brother because I don’t want to build in his spot and he won’t listen to me.”

Mason Brock remarked, “I play Remus. The importance of my part is that we are fighting about where we should build the city of Rome. I say number 6 is better than 12. That’s six vultures.”

Putting on a quality one-hour performance with children as young as eight years old takes a lot of effort and coordination among the teachers, as well as many rehearsals squeezed into a very short period of time. The students began learning the songs in November, but actual rehearsals on the stage with the entire second grade didn’t start until the end of January.

“It was challenging working with such a large group trying to achieve the quality of performance you want as a director versus the time allotted to pull the show together,” stated music teacher Nancy Kraus.

“The most rewarding part to me is seeing the joy and sense of accomplishment in the faces of the students after they have overcome anxiety and stress to perform their part in the show. Performing in a show is something they will remember forever,” Ms. Kraus concluded.

Ms. Rhonda Bowers teaches dance to students in all grade levels as a “Specials” teacher. She commented about working with younger students, who may be less experienced in performing than their older schoolmates.

“Working with the older students you can build on their skill set with things they already know, whereas the younger ones are in the process of learning the basics.”

“The most rewarding thing about this is the excitement of the children once they realize the process of rehearsing, leading up to performing in front of a supportive audience,” Ms. Bowers concluded.

Ms. Irmarie Kraft, the Drama teacher, commented, “The most challenging thing is working with 130 students whose acting abilities vary widely. We have only four  to six weeks to put on these shows before we have to work with another grade level on their new show.”

It’s evident that the hard work and efforts pay off for everyone involved.

Ms. Kraft continues, “It always amazes me to see our extremely shy students get up on the stage and overcome their fears by giving a terrific performance in front of their peers, the school staff, their parents, and their friends.”

It’s a tribute to these three teachers that, along with their other teaching duties, they can motivate their students to perform so well. However, it also takes the cooperation of the whole staff to make these performances so successful and so enjoyable for both the students and the audience.