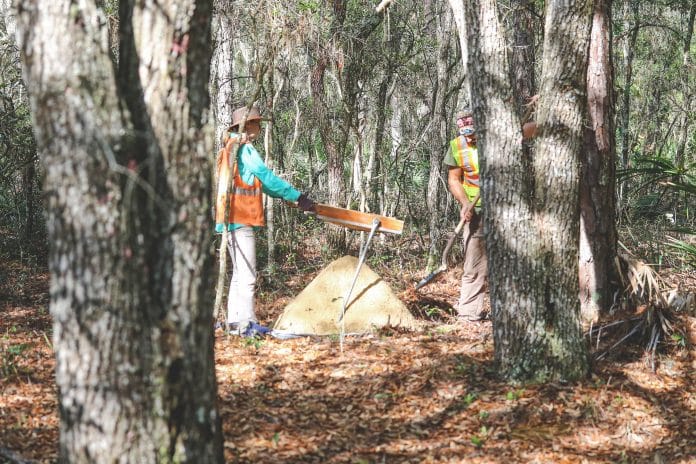 The town of Centralia, just north of Weeki Wachee, Florida, is a well-known historical town and frequently visited by those that would like to step back in time. The town sprang up with the establishment of a cypress lumber mill by the Turner Lumber Company and was inhabited between 1910 and 1922. On September 23, 2017, The Historic Hernando Preservation Society presented a historical marker dedication of Centralia which is visible along US 19, just south of Centralia.

In April 2020, the Florida Fish and Wildlife Conservation Commission (FWC) inquired about obtaining more validation of Centralia’s underlying history. Specifically areas of where the town may have had residential homes, and other buildings of historical significance. This information would be used in the efforts of Centralia’s preservation through land management.

“We have contracted with SouthArc, Inc to study the Centralia site. They are conducting a thorough archaeological survey of that area. Hopefully, when they are finished, we’ll know a lot more about what’s in there, which will help guide our land management activities in those management units. It will also enable us to more closely monitor the site so that we can ensure its preservation into the future,” stated Steve Brinkley in an email.  Brinkley is the Chassahowitzka WMA Area Manager with the Florida Fish and Wildlife Conservation Commission.

“The site has been known for quite a while, The CARL (The Conservation and Recreational Lands) program recorded Centralia as a site but didn’t really do any testing. As far as I know, we are the first to do any testing,” Lucy Wayne, SouthArc’s President, and CEO said. “Basically we are trying to define what remains of Centralia.”

The CARL Report includes a broad history of the Chassahowitzka Area from prehistory through the rise of the timber industry in Florida, previously and newly recorded sites and preservation recommendations for resource management.

The CARL survey report explains that it was Ken Sutherland with the Hernando County Planning Department who first recorded Centralia while he was working on the county’s comprehensive plan.  At that time, local historians excavated artifacts from the area for display at the Hernando County Historical Museum, where the collection remains to this day.

An interesting accomplishment of the CARL Survey was the GPS mapping of the brick foundation for the mill’s saw and the concrete pier foundation of the mill itself.  A segment of the  tram line which runs along the mill pond to the mill was also plotted for field verification according to the report.

The report states, “The C.A.R.L. Survey updated the plot of this site by overlaying the 1914 Soil Survey Map with a current USGS topographic map and our GPS field recordings of the mill foundations and tram lines-as well as determining the overall town site based on structures and features shown on the 1914 map.”

Specifically where the ancillary town structures, such as the commissary, hotel and residential buildings are located remain somewhat of a mystery and that is what the current study wishes to discover.

SouthArc President Lucy Wayne obtained her master’s degree in 1981, specializing in archaeology. She continued her education to get her Ph.D. in architecture, focusing on preservation planning. Lucy and her business partner, Martin F. Dickinson, now retired, opened SouthArc, Inc. in 1989.

“Being an archaeologist, you have to like puzzles to begin with,” Wayne said.

Finding pieces of that puzzle throughout the town of Centralia may lead to a better understanding of the people and activities in the town.

“I love sites like Centralia, [it’s] a very vibrant historic site that has a lot to offer,” Saionz said.

The field team is conducting research on about 157 acres that surrounded the center of Centralia. With each area surveyed, they are hoping to obtain more accurate information on where the town buildings were located.

“The town was actually on a lot of that particular acreage. We are focusing most of our testing where we think the buildings were,” Saionz said.

Centralia is a well known historical site, and the only remains of the town are the poured cement footings that supported the structure of the sawmill.

Fifty to sixty years ago, there may have been evidence to conduct rich historical documentation about Centralia on the buildings and the people who lived there. However, many of the remaining artifacts are most likely gone.

“It’s called a looter hole,’ Stephen Nazian said as he pointed towards the ground. “Basically some folks came out and dug it out and took whatever was there. The stuff they toss away, if it were where it was originally (found) it would be very important to us scientifically.”

Lucy Wayne said that the evidence of looting is an issue.  “I am an archaeologist, and I am constitutionally against it,” Wayne said. “It takes away information that would help us. They [looters] are looking mainly for whole bottles, and whole bottles tend to have things like identifying marks on them where we can date them, or we can tell what brand it is or what was in that bottle. Was it a medicine bottle, was it make-up, was it a soft drink, was it alcohol.”

“Bottles can tell us much more than rusty metal necessarily would. If they’re picking up whole pieces of china that is taking information again. Plus, they are damaging any archaeological features that might be there,” Wayne continued.

The results of the survey being conducted will be collaborated with FWC staff and Law Enforcement to be able to better monitor the site for looting.  (INSERT IGNORE Sign Photo)

“We are the first people to do a subsurface survey of Centralia systematically. We are using a lot of maps that have been done by the county and we are going to try to confirm or adjust those findings based on our visit, and maybe add some knowledge,” Saionz said. “We can’t say that yes, there is something here that we will discover for the first time; however, we’re asking questions based on our survey, and we’re hoping to find something that others haven’t yet.”

SouthArc prepared a press release on April 16, 2020, about their cultural resources survey at Chassahowitzka WMA. Their main objective is to conduct a cultural resources survey in the attempt to determine what remains of the mill, its associated work areas, the town itself, and outlying residential areas. When added to the historical information that has already been accumulated by regional scholars, their survey should provide a better picture of a once-thriving community and industrial operation.

“We have all this historical information and historical pictures, but you’ve been out there, and there’s not much to see right now,” Wayne said. “We are hoping we can find some of the evidence of some of the things that are in the pictures or have been reported in the historical records. There is always a possibility of surprises.”

“Everything we do is with the health of the site in mind. This is a preservation effort, and we are trying to document as much as we can before it continues to degrade,” Saionz said.

To report a find, contact the Division of Historical Resources (DHR) or the Bureau of Archaeological Research (BAR) at 850-245-6444.

Hernando Sun Editor Julie B. Maglio contributed to this report.