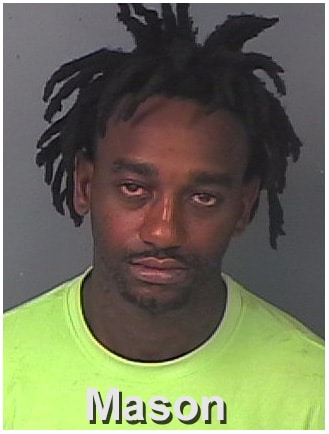 On 06-08-2020 at 2:42 a.m., deputies responded to the area of Dr. Martin Luther King Jr. Boulevard and Twigg Street in Brooksville in reference to a report of a shooting in the area.

Witnesses reported seeing a man driving a red Honda Pilot down Twigg Street shooting a gun out of the driver’s side window.

Upon arrival, deputies quickly located the suspect’s vehicle and attempted to initiate a traffic stop.

Mason then exited his vehicle and attempted to run away. Deputies quickly apprehended Mason

Upon searching the suspect’s vehicle deputies located a backpack containing 2.3 grams of ecstasy, 8.1 grams of cocaine, and 75 grams of marijuana.

Numerous plastic baggies were also found scattered throughout the vehicle.

A K-9 unit was able to locate a handgun in a nearby wooded lot.

Mason has a lengthy criminal history with numerous narcotics-related arrests. He is also a convicted felon.

Mason was charged as follows: