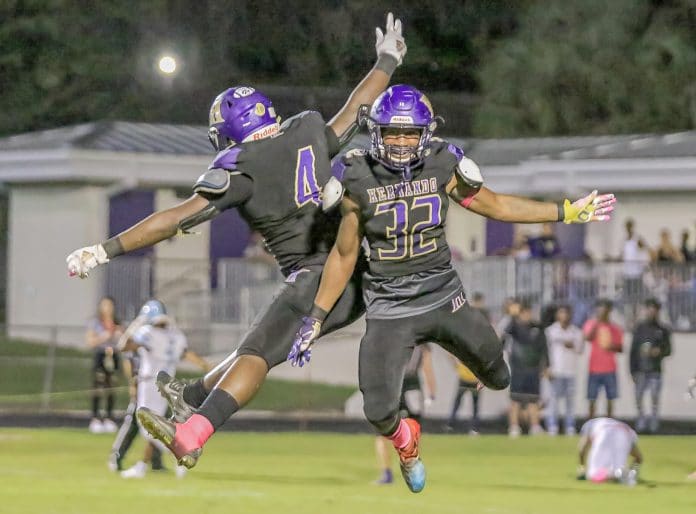 BROOKSVILLE- After a couple weeks deliberating on what exactly the plan would be regarding a return to fall prep sports, the Hernando County School Board made their announcement on what direction they’d be heading in.

Hernando Schools announced over social media on Tuesday that fall sports can begin practicing on September 7th and the earliest that games can be played is September 25th. The decision in making the turnaround somewhat quickly was to resolve many coaches’ fear that Hernando County would be excluded from playing in the Florida High School Athletic Association’s state series.

The return to sports plan by Hernando County seems to mirror a similar one laid out by Citrus County earlier in the day on Tuesday, which many believed would end up being the case since both counties have been working closely together. An original plan that was laid out but not set in stone was the eight schools between Citrus and Hernando would just play a seven game season amongst themselves and exclude themselves from the state series for 2020.

Such a plan was condemned by many coaches and players, as the season would be based on just Gulf Coast 8 Conference play and ending with a conference championship. The argument to be had was whether playing a season was just enough or going beyond and playing for the FHSAA’s postseason also had to be on the table. Many student athletes took to Twitter with the hashtag ’#LetUsPlay’ in regards to playing a season plus the playoffs.

Another consideration to the return to sports for Hernando County was also the seating capacity for fans at venues within the county. The county also announced that stadiums and venues would be allowed 25 percent capacity at sporting events. All high schools and middle schools would have to figure out the exact capacity of each of their respective home fields or gymnasiums can hold before announcing a limit at contests. Below is the press release that Hernando County released on Tuesday in regards to the return to sports.

August 25th- Appearing at the 11 AM Informal School Board meeting, Athletic Directors from each of the district’s 5 high schools presented their plan for a return to play for fall sports in Hernando’s schools.

Hernando high schools will compete against Citrus schools for in-conference play. With the earlier start to the season, the district remains eligible to participate in the state playoff series.

Schools will implement additional safety protocols that include daily temperature checks for athletes and face coverings while on school transportation and where appropriate. Parents are not required to sign a Release from Liability form but are asked to indicate their understanding of the possibility of exposure to COVID-19.

To reinforce social distancing at games, schools will limit the number of tickets available for games. Both Hernando and Citrus will utilize an online ticket vendor to limit capacity to 25%. Parents are encouraged to visit their high schools’ website for more details.