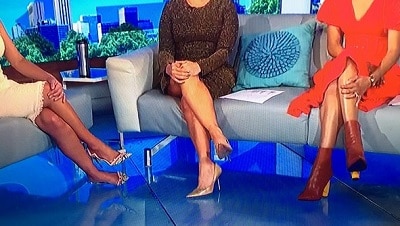 Lately and for months now I’ve noticed a change in the news.  It used to be, female anchors often sat on couches with shortish skirts, and by necessity they kept their legs crossed.  When they were required to stand in the middle of a set, they stood cross-legged because the floor was highly polished.  I first started noticing this on HLN, when often a guest would sit next to the anchor and mirror mimic her knotty posture.  It was like they were attempting some sort of couch yoga.

What I want to know is, did the news require females to dress that way, to sit deskless with bare legs?  Will they do so again in the future?  And which producers are trying to get a shot up their skirts with a shiny floor?  Or is all that meant to attract male viewers?  Whatever, isn’t it contrary to modern sensibilities?

My life has always involved women: grandmothers, mother, sister, wife, daughters, and a granddaughter, and I have always expected them to be free to pursue careers that are sexless, with only intellect and/or technical expertise.  Women should have the choice to wear long skirts or dresses or pants and sit behind desks so they don’t have to contort their legs, which is uncomfortable and certainly interferes with circulation.  And all floors should be non-reflective.

I used to cross my legs because that’s what I saw adults doing in real life, on TV, and in movies.  Eventually, that grew painful, and so I switched to the less hip-hurting right ankle on left knee position, which I also saw in real life, TV, and movies.  I did that for years, and then I started noticing that there was a dent above my left patella and a dent across my right fibula just above my lateral malleolus.  Not only that, but hair had stopped growing in those places.  And they were feeling a bit numb.  So thirty years ago I stopped it.  Now I sit with feet apart and knees open, and I don’t care what others do in real life, TV, or movies.

However, I now have a long dent above my left knee and a dimple-dent above my right from all the times I’ve propped my left arm and right elbow on those spots of my lap while reading on the toilet.  I can’t help it.  Not only is there excellent light in the bathroom, above and to my right over the sink, and reflected in two mirrors, but I enjoy the airy freedom from apparel.  Naturally, I still look for frogs before I sit down.  And lately, I’ve been thinking about kilts again.  Between a scene in one of the Harry Potter books and a scene from the sitcom How I Met Your Mother, I’ve grown interested in the freedom of no underwear and no pants.

Airy apparel is what I’m thinking, like perhaps a house kilt, a quick donning of simple clothes after my nighttime shower, and sipping coffee in the morning.  T-shirt and a kilt, and terrycloth flipflops—does anyone make those?  Oh, I have a robe, but it’s knee-high, long-sleeved, with a thick collar, and made of 100 percent Polyester.  Even in my wife’s chilly house of 73 degrees I get too warm at my desk.  I’d like shin-length, pleated cotton kilts, and maybe a baggy Polo shirt for evening and morning wear.  I want it airy underneath.