Halloween Happenings through the Years; Pages of the Past 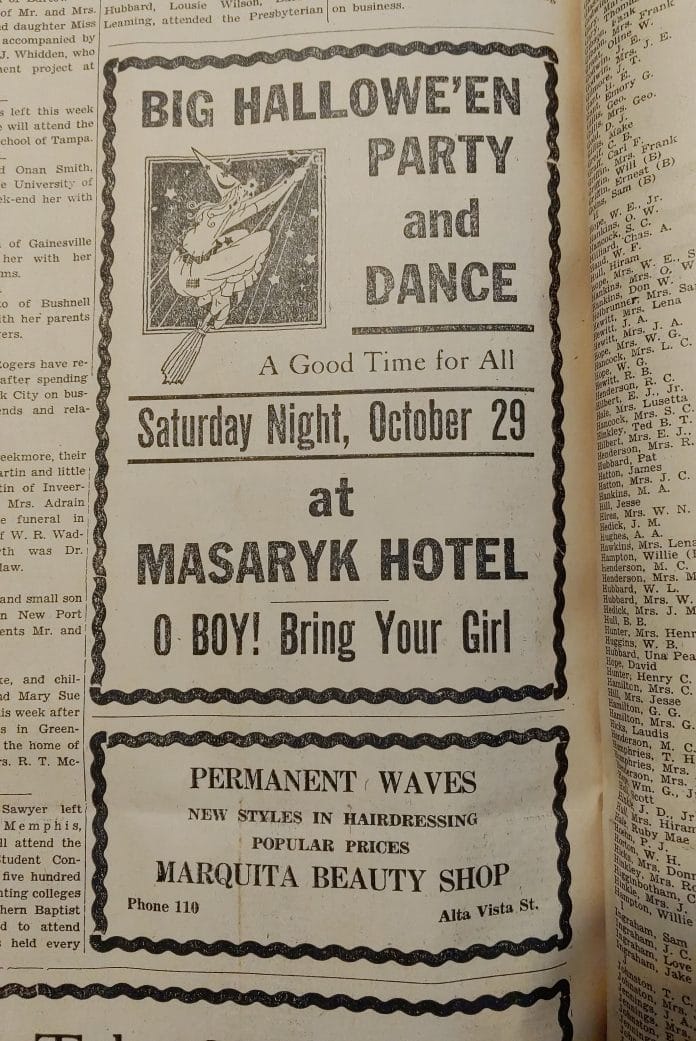 Our time machine seems to be acting peculiarly – as if it’s haunted. It’s only stopping at the days prior to Halloween for the past seventy years. Some of the news stories are scarier than any mythical ghosts, goblins, or werewolves! But let’s begin with the lighter side of Halloween.

In 1949 Masaryktown was celebrating Halloween with a dance. The ladies could look extra pretty by getting a permanent wave prior to the festivities. Notice the phone number. Back then there were so few phones around that the numbers only consisted of three digits.

In 1967, candy was a bargain. You could buy a 160-count bag of Casper Bubble Gum for only 59¢ and 150 peanut butter rolls were only 79¢. Back then many children donned homemade costumes rather than the fancy expensive ones you see in the stores now. In fact, the costumes were so original that it was a guessing game as to what or who the child was supposed to be portraying. Does anyone have any idea what the last three children in the row of kids pictured here are supposed to be? Apparently, the photographer didn’t know either.

Picking out pumpkins for eating, carving or decoration is always a fun pre-Halloween activity. Little Daniel Johnson seems thrilled at the prospect. His mother even dressed him in clothing to match. Perhaps, he even wore a pumpkin costume when he went trick-or-treating that year.

Unfortunately, in 1989, there were real-life scary things to worry about. School and law enforcement officials were afraid that Satan worship would raise its ugly head in Hernando County and prepared themselves by attending seminars on this practice. And even though many teenagers were into Heavy Metal music at the time with its pentagrams and Alice Cooper biting the head off a chicken, the only hint of something untoward going on was “satanic-related graffiti and chicken feathers” found in the area. Devil-worshipping chickens, perhaps, or maybe Cooper paid an unannounced visit??

Another real-life menace – scarier than the Walking Dead – was invading Hernando County. The Ku Klux Klan wanted to hold a rally in downtown Brooksville. In order not to deny these folks their right to free speech the police chief allowed them to hold the event. Anthony Bastanzio, the leader, who came here from Lake County, threatened to bring Rottweilers that he said could “clear out 60 people real fast” if any problems arose. Whether or not they did wasn’t reported in the papers. In the end, the Klan members, Skinheads and Neo-Nazis were outnumbered by police and counter-demonstrators.

The late 80’s was the height of DVD popularity in the United States and 64% of the 90,000 households in Hernando County owned a video cassette recorder. “What’s a DVD and a VCR?” ask the Millennials. A VCR is a big, clunky rectangular box with a slot in the front that little kids like to stick things into. And a DVD is a plastic thing that contains magnetic tape wound around two spools which almost always seems to get unwound. You then have to open up the DVD with a screw driver, get the tape untangled, then stick a pencil through a hole in one side of the cassette and rewind the tape. If you wanted to watch Ghost Busters II you could rent copy of the film at the supermarket or one of many video stores and watch it in the comfort of your home.

You could watch Halloween 5: The Revenge of Michael Myers over and over again if you purchased the DVD. Those of you over the age of fifty who still have a VCR and a collection of DVDs, hold onto them. In another thirty years your grandchildren will be able to sell them for a fortune!

The following year, things were back to normal, but that “witch” in the picture below looks mighty scary. The headline underneath the picture seems to state the obvious: “Change is inevitable” – something we need to remember in these challenging days. Kids were enjoying the time-honored tradition of pumpkin-carving. I’m sure plenty of soap and water was on hand afterwards.

In 1998, a coven of witches invaded Weeki Wachee. Actually, they were only a group of middle-aged women called the Weeki Wachee Walkers having a fun day of canoeing. The person who wrote the copy had an alliteration affinity when he (or she) crafted the headline: “Wild, Wacky Wonder Witches of Weeki Wachee.”

Two years later we were back to scary happenings. There was a presidential election taking place which would turn out to be the most unusual (so far) in our history. Our state has the honor of being a decisive factor in presidential races, so both candidates were campaigning heavily here. In the end, it would be Florida that would create the most problems for both candidates with its “hanging chads.”

Halloween that year seemed to be more tricks than treats. Some “tricks” were more serious than others. From a child being hit by a paintball fired from a passing motorist and a mean-spirited person substituting dog treats for candy to a really sick individual injecting a petroleum-based substance into a Twix candy bar, children and their parents had to be more wary the following year. Perhaps that accounts for fewer children going house-to-house these days for their candy “fix.”

We have arrived back home and it’s October 30, 2020. Halloween is going to be different this year. Not only will there be no children roaming the neighborhoods begging for candy, but there will be few Halloween events or parties. That’s no reason not to celebrate, though. How about mom, dad and the kids dressing up and having a party at home? Decorate the house, make Halloween cookies and pumpkin pies, play games, bob for apples. Think of the great costumes you can make. Your kids can be doctors and nurses. All you need is a white mask and white jacket. A clown costume is easy – a loud shirt and pants, preferably mismatched, and some face paint. The possibilities are endless. After the festivities you can settle down in front of the TV and stream any number of scary movies. Have a safe and fun Halloween, everyone.