To Catch a Ghost 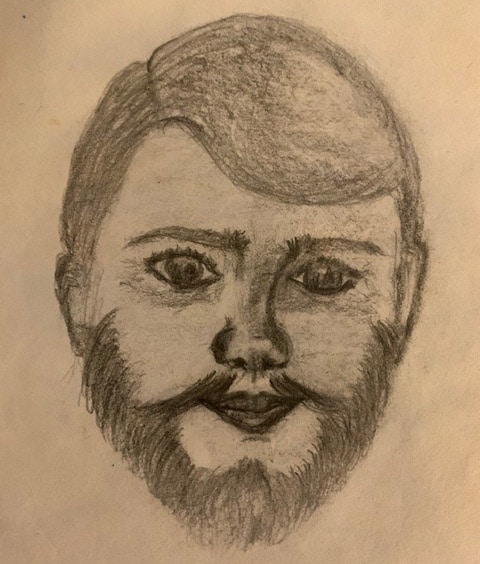 The day we moved into the big foreboding house on East Placement Road, was a huge change for all of us.  Exciting too, but not necessarily noteworthy as moves go, unless you count the scorching words of my mother, as my dad fumbled around for the key to the front door. I remember them to this day, “Shush, you kids are making so much noise the neighbors will think we’re heathens!” She whispered.

My mom and dad in their mid-thirties at the time were good salt-of-the-earth Midwesterners, raised in small town fashion, as were their four young daughters.  We were used to lots of property between houses I might add!  I was the oldest. A typical twelve year old first born: gangly and bossy and head babysitter. My three little sisters were ten, seven and three. We were all healthy, rambunctious kids ready for some unbridled fun in our new surroundings, but no we had to be good today. Good impressions were obviously part of the rules on this momentous occasion; so we made like little clams, and shut-up to please the folks.

Mom always seemed to know best because one could see the neighbors’ homes were just a stone’s throw away and packed in pretty tight for this short, narrow street that connected to one of the main arteries to downtown Columbus.  My dad liked the location because he could take the bus to work. Mom liked it because she could hop on the bus any time of day, to go shopping at one of the best shopping emporiums in the State-Lazarus department store!

We all settled easily into the drafty, century old residence. My parent’s general critiques of our time-worn home were often overheard at the dinner table, but the subject of ghosts was never discussed. Mom hated the wine-colored aged carpet in the huge living room/dining room areas, and the flowery wallpaper everywhere had to go!  Dad thought the house needed painting and was aggravated with the plumbing in the postage-stamp bathroom off the kitchen, but all in all things were bearable albeit far from modern.  It wasn’t long before it seemed we had always been there, and inside the house the echoes of we girls’ boisterous laughter and manic marathons up and down the creaky stair to our bedrooms happily could not be heard by the neighbors, although my dad was always complaining about the noise. The man read everything in sight, and nearly licked the words off the morning newspaper pages.  So quietness was important to him. We were a happy normal family there, and things were progressing as they should without many upsets or worries.

I guess one could have called our house spooky looking, reminiscent of the Amityville Horror house of the 1970s. But, this was 1954 and no one in my family talked of such things, but as I think back, it really was such a place. It had a peculiar air about it probably because of the huge outdated rooms looming everywhere I went. I always felt uncomfortable in my bedroom’s walk-in closet. The cobwebby unfinished attic kept me curious for the seven years I lived there. I was never brave enough to crawl back in it. The dank basement with its low ceilings-where Mom did our laundry was nothing short of creepy, and dad’s workroom with its rickety, squeaky door was bleak and scary-nasty. Whenever dad sent me down there after dark to retrieve a tool for him, I’d cringe. I tripped more than once running back up the steps thinking someone was behind me!  Another thing I hated with a passion was the basement’s makeshift play-room. It was the worst!  I must say though, there sure were plenty of places to play hide and seek.  I used to hide and jump out and scare my sisters when they were unaware I was lurking under the staircase or behind the furnace.  The little one was especially easy prey. She hated me for that; I guess the devil made me do it…or something.

A couple years had gone by and my siblings and I were growing like weeds. I was now fourteen years old: a prissy teenager in Junior High School (so called in the old days).  I was into new hair styles, red lipstick and the cake mascara one mixed with water and applied with the tiniest brush imaginable. Although, most of the time I was makeup free.  I liked going to sock hops, had lots of pop records, and enjoyed school functions like Spring Concert or boys basketball games. I liked boys, but didn’t go steady.  My life was without the stresses that many teens today put themselves through. My world was my family, my school, my neighborhood friends, and MYF (Methodist Youth Fellowship) at church. I was a typical teenager in those times, at least in my circle.

I usually was in bed before 11 o’clock on a school night, so I had been in bed asleep three to four hours when something awakened me from a sound sleep.  I blinked hard, my groggy, sleep-filled eyes trying to decipher a shadowy figure standing at my bedside. A man I deduced by his size, although his face was not clear, but somehow I knew it was a man and he was quietly looking down at me. I screamed bloody-murder. “Get away from me! Get away, get away!” I kept screaming all the while my wild, flailing arms whipped at the midair apparition like I could hurt him; not soon enough for me, he quietly melted away without a clue. In an instant my mother was there to calm me down.

“It was just a bad dream Linda, that’s all it was,”  she reassured me. “You are just overtired.  We all have a bad dream now and then.”

Dad was still grousing from their bedroom at the end of the hall when mom patted my head and turned to go back to bed.   “Stop that racket, I’m trying to sleep,” my disgruntled father snorted.  And that was that.

I don’t remember discussing this bizarre happening at all until the next time it happened about six months later and again a few months after that.  By then my sister who shared the bedroom with me was about to start sleeping on the couch. And dad had begun screaming shut-up at me! A phrase we were not allowed to use.

I am not sure if my folks ever thought this was a ghost or not, we seldom explored the subject, but I knew this thing was definitely a ghost, and I would never believe it was just a harmless nightmare. It was most certainly becoming a heart-pounding dangerous nuisance as I saw it. The darn thing would slip up on me when I least expected it; scaring the living daylights out of me.

Five years later I was 19 and planning my wedding day. The ghost had slacked down a bit with sometimes only one or two visits a year. I had almost forgotten he existed. I had never mentioned my recurring nightmare to my fiancé anyway, so why now? My hope was I would outgrow the thing or he wouldn’t find me at my new location.

Life was good, and I was marrying the sweetest young man.  We met when I was only 17.   His father owned a Sunoco business at the end of my street. My guy was working there while attending OSU. He had spotted me at the station a few times, called me up and as they say, the rest is history. After we married, we settled into a cute two story townhouse miles away from East Pacemont Road.  Little did he know I would be bringing someone along with me?

I recall one particularly hilarious incident, when we were sleeping and I woke up screaming at the top of my lungs as a dark mass hovered over my side of the bed.  Trying to distance myself from it, my crazy arms thrashing like a willow in a windstorm knocked a pole lamp into our bed hitting my husband in the head. Scared out of his wits, he quickly grabbed his pillow thinking it was an intruder, and beat the heck out of the innocent lamp. If ghost’s laugh, I’d bet this one was holding his sides.  Neither of us thought it very funny as we got ourselves untangled from an unruly electrical cord. Through the years as I dealt with this pesky anomaly, my husband would usually just hold me tight until my heart rhythm returned to normal, but this time was different. “Gosh Linda, don’t ever do that again!  You scared the heck out of me,” he growled.

The last time I saw the ghost I was 44 years old. Maybe it was the waterbed, who knows, but when my eyes flew open and there he stood dressed in a spiffy black cape that hung to the floor; I was remarkably unafraid. I could see his face for the first time after 26 years of guessing what he might look like.  His longish hair was black and he wore a well-manicured mustache and goatee. He was slim and looked of the mid-1800s. I decided I wanted to see him closer, so I reached out to grab his cape to no avail; there was nothing but thin air. “Come here, I want to see you closer,” I said sternly.  With those words, this bothersome supernatural entity backed up and disappeared into the closed bedroom door. I nudged my husband, “did you see that?” I asked him. He hadn’t. So I went back to sleep.

The next day I drew my ghosts’ picture, which I still have somewhere packed away.  The astonishing part of this story is we had lived in six different houses, and eventually moved to Florida and each place I had relocated he had found me.  He even visited my two daughters a few times, but that’s another story.