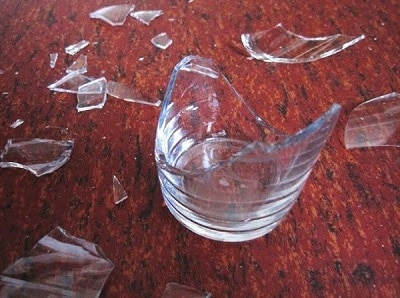 I remember dropping a glass on the kitchen floor circa 1964 and reaching down to pick up the broken pieces.  Dad was off doing military things, and mom was working at a nursery.  I don’t know where my sister and brother were—probably ignoring the sound of something shattering.  It was either a weekend or a day of summer vacation, but it was late afternoon and I was getting a drink of water after watching something on TV in the small room Dad called the den.  I watched a lot of late-night monster movies there.  I now have a vague recollection of some PBS show in which a black and white-blond girl was lost in the woods or something.  I fell madly in love with her.  There might have been dinosaurs.  My watching could have been during when the famous networks of ABC, CBS, and NBC were annoying my kid-patience with news or sports or other adult shows, and so I tried that UHF channel.  That happened often, especially on weekends and in the early evenings.  But this day was not night, so I’m going with the lost girl, dinos, and weekend.

I cut myself, not deep, just a nick that bled like a finger stick.  I did what mom had taught me, washed my finger with soap in the bathroom, added a dab of bacitracin ointment, and wrapped on a Band-Aid.  Back in the kitchen, I decided to use the broom and dustpan.  That might have been my very first time.  I remember being surprised at how far across the tile the bits of clear glass had scattered, all the way to the base of every counter, and a curved shard was resting on the carpet just inside the dining room.  I swept and swept, dumping the dangerous debris in the garbage can, which back then was lined with a brown paper bag from the commissary, the BX (Base Exchange) version of a grocery store.  Plastic was years away.

I did a lot of my playing barefooted back then, but for some reason, I was wearing socks and shoes that day.  At 102 months old I had perhaps started outgrowing that juvenile disregard of attire, or maybe I was both wary and weary of stepping on sticker plants, which seemed to me were growing more and more invasive in the neighborhood.  Whatever the reason, I had my shoes on and remember hearing and feeling glass crunching underfoot as I walked and swept around the kitchen.  Twice or more I used the broom to dust off the bottoms of my shoes, but I was never convinced I had gotten it all, not off the floor and not off the dining room carpet.  I recall being very worried about my siblings who, at around 60 and 36 months, were not old enough to care about bare feet.

Trying to reconstruct that day, it occurs to me that I was alone in the house, that my sister and brother were actually with our mother at the Base nursery where she worked.  What I do know for sure is that when mom got home, she wasn’t angry.  My mother is what the 1950s TV moms were based on.  And that is high praise!  When I explained what had happened, she got the vacuum cleaner and ran it all over the kitchen and dining room and the rest of the house.

That singular incident stayed with me all my life.  I, too, vacuum thoroughly after anything breaks.  But more notably, when my kids were little and I heard something shatter I yelled “Don’t move!”  I then rushed to wherever they were, usually the kitchen, lifted them straight up off the floor, set them on the dining room table, and examined their feet, which of course were bare.  I did the same with my grandkids.  Did it many times over the years.  I’ve even yelled “Don’t move!” at my wife when she broke something.  It’s now ingrained in my psyche.  I can’t help it.  However, I must boast that I have never yelled at myself when I break something.  But I do freeze in place, survey the situation, and always, always sweep the bottoms of my slippers.