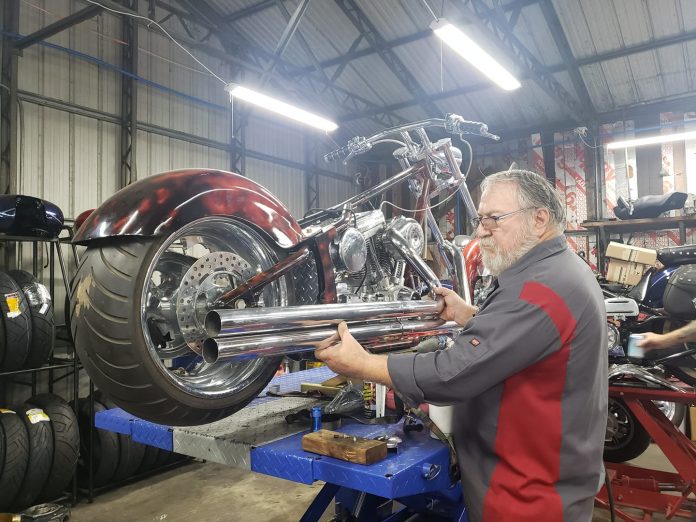 No one has a smile quite like Marty Pease.

From the moment you meet him, you feel like walking right into his store. The office is cozy, quaint, and filled with motorcycles and motorcycle parts. Bike posters are on the wall. The lighting is pleasant. Even the smell is welcoming.

But that’s only your first impression of the guy and his business.

Marty doesn’t quite look like one of your typical mechanics. And you can tell, simply from the get-go, that for this guy, business is pleasure– and he clearly puts his personal touch into everything he works on. That’s obvious even to people who don’t know a darn thing about choppers.

Upon first meeting him you’re immediately struck by his, “I-can-fix-anything” attitude.  He sports a handlebar mustache and not the usual goatee so many bikers go for. And his main tools are – his hands which have obviously repaired many a bike in his lifetime.

Marshal Stewart Pease, age 65, was born in the quite distant state of Alaska and has been a mechanic for over forty-seven years. After being transplanted from the ‘Last Frontier’ Marty’s family moved to Brooksville, Fla. He began riding at the age of twelve, and the idea of cruising on two wheels is what got him into bikes.

Around the age of sixteen, Marty purchased his first motorcycle, a Honda 125. After that nothing could stop him. Since then, he has learned many things, like how to disassemble and reassemble a bike in mere days. How to INSERT IGNORE his personal sense of care into his work. That’s not all, Marty is not the only rider in the family, his wife rides too. In fact, recently she just got her own Suzuki Intruder 800.  So, it’s safe to say, his roots come from years of surrounding himself with anything that has a motor and two wheels. And those roots sucked him in at an early age.

“I don’t fear riding,” he told me, with the confidence and reassurance of a man who’s been doing this for what might as well be forever. “The freedom of the road is what makes the ride worth it.” Oh, and for the sake of not forgetting anything, you should know that Marty’s favorite bike is a 2011 Harley Ultra Classic.

Marty’s shop is MP Cycles, the brainchild of this mechanic, which had its grand opening on June 1, 2019. It is located at 17022 Cortez Blvd. You can’t miss it. Out front is about a dozen different types of bikes for sale, ranging from the typical Harley to the more fancy Victory. The office and garage sit behind the choppers.

“Brooksville was a great place to grow up for any aspiring rider,” said Pease.

“I always dreamed I’d have a garage, even years before I did. I never would have thought – if you told me 20 years ago – that I would own one like this, though,” he had to say. Marty’s passion for working on bikes came from his stepfather, who was a mechanic too, and he got his first taste for the craft when he worked alongside him in his family garage. His purpose of creating his own shop is just as inspiring.

“… I wanted to create a place where people could bring their motorcycles and trust the person working on them. And give them a good feeling when they walked in the front door knowing that we were gonna take care of their problem, fix it right the first time and that they’d be happy when they rode down the road knowing it was done professionally and correctly.”

One of the best things about this place is that you can actually learn a thing or two about bikes upon visiting. “I enjoy teaching, and sharing my knowledge,” Marty said, full of pride. When it all came down to it, he had this to say about his life, his work, and his passion for choppers: “Success,” he said proudly, confidently, “is waking up in the morning and knowing you will enjoy your day.”

And by that definition, you can tell this man’s life hasn’t just been one wild ride, but that there’s still more riding to be done in the future.