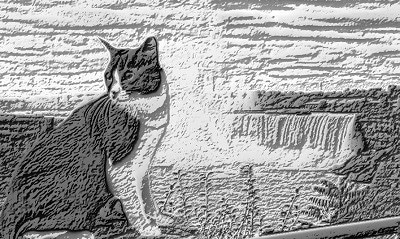 The next day we toured the falls and spent another night there.  We didn’t see Thoris at all.  The following morning she came back while we were getting ready to leave.  We made kissy sounds, and I ‘mer-owed’ and even ‘m’owed’ to get her to come into the camper so we could grab her, but she remained aloof, always sniffing the air.  After pushing the pullout beds in and cranking down the top of the camper, I tried to get her to come back in the car.  She would not.  I chased after her, but she was faster than I’d ever seen her run.  I now think she pulled a “squirrel” on me because I lost sight of her when she ran behind a large tree.  She must have climbed up it.  But I didn’t see her anywhere in the branches.

When I got back to the car, dad nodded and said, “This is her choice.  We have to go.”  And that was true; dad had to report on a certain day, so we were on a schedule.  There were many other cats in the area, and she wasn’t fixed, so we could only agree.  We left within the hour, and we kids stared out the windows looking for her as we drove away.  All of us were sad, and my sister cried.

I like to think Thoris came back later to see if we were still there, under the canopies of the tall, sparse trees, but new people were parked in that spot and so she pranced away and went on with her new life.  I also like to believe there are now hundreds of thousands of her offspring hunting the woods and living in homes all around the northeastern states.

Oh, I’ve had more cats over the years, but none of them ever talked to me.  And against my wishes, my wife brought two cats home last year.  I no longer want pets.  Sometimes my own feet get underfoot, so I don’t need pets and their toys on the floor.  No pets, no babies, is my motto.  Sure, I’ve played with her cats.  I stuck a long feather from Hobby Lobby into the end of a thin garden stake made of green-painted bamboo I got at Exwork and used it to spin them in circles and make them chase all around the house, but that’s so they’d fall asleep and stop making noise.  Takes five minutes, and saves me from hours of annoyance.  And I’ve given them small cloth mice dipped in catnip for the same reason.  Cats are best when they’re sleeping out of the way.

But you know what?  My wife’s cats don’t talk.  They are completely indoor cats, well-fed and with a clean box, and apparently, they haven’t invented a language between them.  I’ve heard them growl at each other when they’re “play” fighting, but I haven’t heard them meow since they were kittens fresh from the pet store box.  Maybe I should teach them.