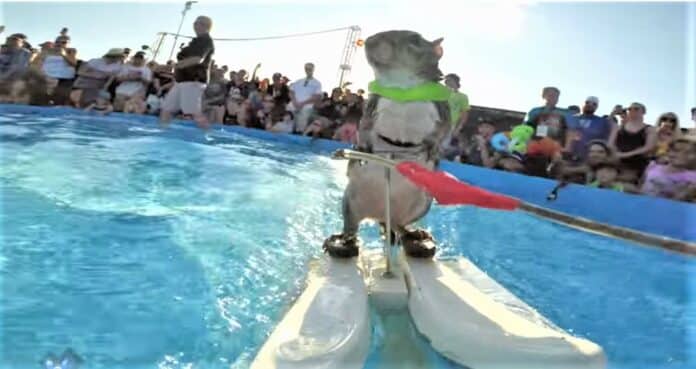 At The Hernando Sun, we receive numerous press releases everyday.  Occasionally, one comes in that sparks the imagination…

The Hernando Sun would like to issue a formal apology to Twiggy the waterskiing squirrel. In retrospect it was a poor staffing choice to send our two orange cat reporters William Randolph Hearst and Joseph Pulitzer to interview Twiggy. In the past we have always allowed reporters to choose the stories that they cover, so when the Twiggy press release came across my desk, they were the first to volunteer. It was shortly after our newspaper went to print on Wednesday and it had been a late night Tuesday, so I was not thinking clearly.

The interview apparently started off with Twiggy losing her normal poise. From there it turned into a hostile interview where Twiggy was on the receiving end of an unpleasant exchange. Thankfully Twiggy’s trainer intervened saving her from the distressful situation.

Our liability insurance has informed us that they will not cover Twiggy’s veterinary bill, so we are starting a go fund me page to help her out. There was apparently a clause added after William Randolph Hearst and Joseph Pulitzer interviewed the star of Steamboat Willie.

While the events involving the yellow journalists and Twiggy are imaginary. Twiggy is a real waterskiing squirrel and actually is performing at the Orlando Boat Show this weekend in her final show.