HomeUncategorizedAfter slow start, Sharks surge their way into the second round
Uncategorized

After slow start, Sharks surge their way into the second round 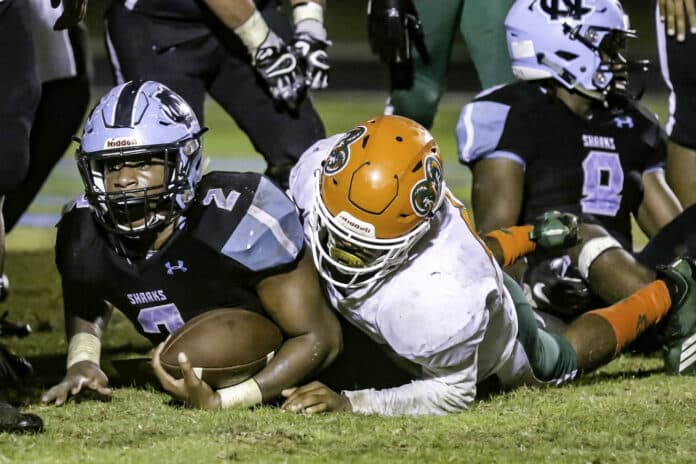 The Nature Coast Sharks entered the FHSAA Class 5A, Region II quarterfinal as the best team in their district (5A-7) and the region, which enabled the squad to ensure home field advantage throughout the first three rounds of the playoffs. Their first opponent: the Gainesville-Eastside Rams, a squad who, despite their 7-3 record and #8 seed, was a very formidable foe.

And, despite some early self-inflicted errors which put the Sharks behind the 8-ball early, they were able to rebound and then some, scoring a season-high 57 points in a 57-26 victory over the Rams to advance to the Sweet 16 for the third time in the last four seasons.

Nature Coast was led once again by senior tailback Michael “Mike-Mike” Weston (38 carries for 240 yards and four touchdowns), who impressed 3rd year Rams skipper Cedderick Daniels, even garnering a very interesting compliment: “I’ve coached against (former Alabama and current Tennessee Titans) back Derrick Henry, but he’s special. I didn’t think he was as fast as he was. He’s definitely very strong.”

The self-inflicted errors came on special teams for Nature Coast. On their first offensive possession, the punt by junior tight end Cai Teague was shanked and only had a net of ten yards. Two plays later, junior quarterback Anthony Richardson (a UF commit), demonstrated his incredible arm talent, finding tailback Deion Jenkins on the far side of the field for a 20-yard score.

On the next possession, also ending in a punt, the snap sailed over Teague’s head, forcing him to improvise. One rush by Darnell Greenwood after, and it was 12-0 Eastside.

“This was probably the first game all season we’ve had big mistakes on special teams that cost us,” explained Sharks head coach Cory Johns afterwards. “Defensively, we only gave up two touchdowns, and I put that credit up to my defensive coaches (Charles and Chase Liggett) for coming up with schemes to counter what this group brought to the table.”

Following this situation, Weston singlehandedly decided that was enough, and personally made it his mission to bring the Sharks back, scoring two touchdowns himself to give the home team a 14-12 advantage after the first quarter.

Eastside wouldn’t give up, however, taking the lead just after the second quarter began, with Richardson finding Tim Johnson behind the Sharks secondary for a 67-yard bomb. The theme of Eastside’s offense appeared to be attack the secondary, and most passes succeeded in that regard; they just were dropped consistently, forcing the Rams to play catch-up most of the second half.

On the Sharks’ ensuing possession following the lead change, Weston aligned with his signal caller, junior quarterback Fabian “2Fabe” Burnett to bring NCT down the field, and Burnett would finish it off by finding “Baby Moss” Teague on a diving 15-yard catch to regain the lead. Weston would add his third score of the contest just before the intermission, and it was 28-18.

From there, Johnson fielded the kick for Eastside and dashed through the Sharks’ kicking unit for a 90-yard touchdown, and after a successful Richardson two-point conversion, that would make the closest the Rams had to take the lead back.

From there, Weston added his final touchdown of the game, a 43-yard scamper up the middle, and was then aided by sophomore athlete Kinyatah Morgan, who scored on a 65-yarder and a 16-yard run. Burnett would add a beautiful arching pass over the Rams secondary to Brian Morgan, and that would prove to be the final margin.

For Nature Coast, their win means for Hernando County high school football, they’re the last team standing. They now must prepare for a home game against the Baker County Wildcats, who defeated the Hernando Leopards in the first round 28-14. This game is a rematch of last year’s first round, in which the Wildcats defeated NCT 34-7 en route to a state runner-up finish. Despite the looming rematch, Johns isn’t looking ahead: “Their offensive line isn’t the same because (Riley) Cooper graduated. It was him who made a real difference up in the trenches. Regardless, they’re a good team, but they’re not who they were last season.”