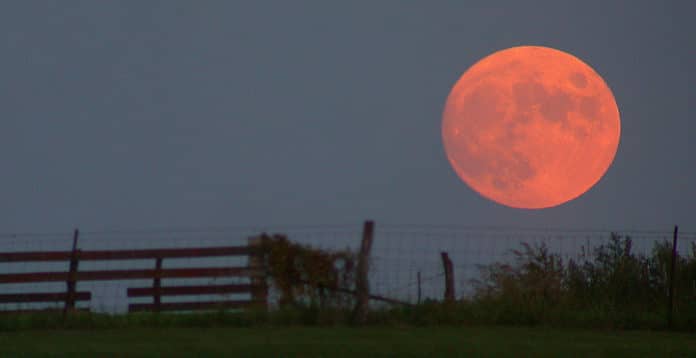 It is fitting that September’s moon is called the Full Harvest Moon.  This full moon rises soon after sunset.  Imagine the days before electricity and you will realize how important that was.  It provided much-needed light for the farmer to harvest his crops.

Harvest Moon is the name given to the full moon closest to the fall equinox.  This usually happens in September but can even occur in October.  What is an equinox anyway?   It is when the sun sits directly above the equator and gives us an equal amount of daylight and darkness.  It happens twice a year–once in spring, once in the fall.  The word equinox comes from the Latin words for equal and night.  During that time we have 12 hours each, equal amounts of day and night.  The fall equinox is September 22 this year.

The Chinese celebrate the full moon with the Mid-Autumn Festival.  It is their second most important holiday after the Chinese New Year.  Mid-Autumn is celebrated in the middle of their 8th lunar month, about the same time as our Harvest Moon.  Timing can put the festival anywhere between early September to early October. Its history dates back 3000 years!  It goes back to the days when Chinese emperors worshiped the moon.  To the Chinese, this is a very important time.  The moon’s brightness and fullness symbolize togetherness.  It is a time for sharing, courtship, and matchmaking.  Workers are given days off.  Families gather and friends visit.  There are lanterns lit, meals enjoyed, and gifts are given.  At this time they often drink tea and eat mooncakes.  There are town firework displays and dragon dances.

What is a mooncake?  It is a rich pastry filled with a sweet paste, such as lotus or bean paste. Salted egg yolk is baked in the center.  The cakes are shaped round like the moon and pressed in a mold.  This gives the finished treat an elaborate design.  They’re then wrapped and sold in fancy boxes for gift giving. You can order them online and some are very expensive.  Advertisements for them appear months in advance of the Mid-Autumn Festival.

Other names for the September moon come from the Native Americans.  They called it Barley Moon because it came at the time of harvesting and threshing the ripe barley.  The Cherokee called it Nut Moon.  Their tribe gathered nuts and baked special bread to celebrate the harvest.

Some tribes called it Big Moon.  A rising full moon appears bigger and brighter, but it is a trick the horizon plays with our eyes.  However, the moon can indeed come closer to earth and be 14% larger and 30% brighter for real.  In 1979 the phrase Super Moon was coined.  That refers to a full moon or also a new moon that is at its closest orbit to earth (the term is perigee). Closeness is measured by the number of miles.  A Super Full Moon can happen several times a year.  We’ve already had ours for 2021 ( April and May). We’ll have to wait until next summer (June and July 2022) to be treated to the extra brightness again!

There are many special events planned that celebrate the full moon.   Did you know it is popular to have witches on paddleboards?  Full costume, cape, pointy hat, and all!  You may see such an event in Florida anywhere from St. Augustine to the Florida Keys during the months of September or October.

Another popular event is a sunset cruise on the night of a full moon. They are offered everywhere. Florida has no shortage of them.  However, a beautiful dream cruise of mine would be one I saw online.  You sail along San Francisco Bay aboard an 80-foot schooner.  Imagine being able to see the full moon against a silhouette of the Golden Gate Bridge!   And to see Alcatraz by moonlight!  I could picture it.  What a way to toast fall and greet the Harvest Moon!